Pre-race – This race should be more about the driving and less about the mechanicals and crashes as the drivers have had three races to get their cars sorted out and dialed in and have more track time to get a feel for their cars.

Track conditions would play a role in this round with the track being lacking its usual grip due the past Thursday’s wall construction that put down a layer of saw dust on the tracks surface.  No matter how hard you clean the track its impossible to get all the dust picked up and while you are picking up the dust you are also picking up the rubber that had been put down in earlier races making the track very slick in the corners.  At least we can say the track is the same for everyone.

This round would be run withoutClarkand his Guinness car due to a previous engagement but we would have all of the other regulars.  Everyone came with their cars prepared and ready to run.

The week between the races sawRoyput in some needed development time into hisToyotato where he had it running in the 4.0 range with some 3.9’s.  Those are some super fast times and will surely getRoya podium spot.

Brian had his Dauer Porsche running consistently in the 4.0 range with an occasional 3.9.  Brian has taken the fourth spot in the overall standings and with a good clean run can move up on Shawn who is only two points ahead of him in third or Jim who is four points ahead in second.

Shawn is in third overall only two points behind second place in the overall standings and with a good run he could move closer to second or maybe even overtake Jim.

Jim was running some very fast laps in the pre-race warm up and looks like he could take it to the Jagermeister in this round of the series.  He has gotten closer on each round and this could be the one where he finishes first.

Marty had the Jagermeister out for it’s pre-race warm up and had a crash with Ary’s Porsche.  The crash was not that significant but you could hear the crown gear in the Jagermeister starting to make some noise.  To be safe Marty changed the gear and put in a few more practice laps to make sure the quick repairs had solved the problem.

Ary was trying all sorts of things to get his blue Kenwood Porsche to work.  He tried using a 34t crown but did not like the braking so he went back to the 36t.  This helped his braking a little but he also had a problem with getting his rear tires to hook up.

Russell was once again running the Ford Probe and once again it was very fast in the pre-race warm up.  It was one of the fastest cars in the start/finish speed trap.  The question is:  did Russell give up too much downforce in the turns to pick up straight line speed?  We will see.

Heat 1 had Marty in yellow, Brian in blue and Jim in green.  The race started for Brian and Marty but Jim’s Miller Porsche stalled on the start line.  The car finally started a half lap behind the others but could not continue as it looked like the car was experiencing electrical problems.  It looked like Jim would have to perform repairs under green and lose even more time.  Just as he was bringing his car to the pits the other two runners had a big off and the yellow flag come out.  Jim was able to work on the car under the yellow and sort out what the issue without losing more time.  Back in the race with his electrical issues resolved Jim was running very fast trying to make up the time he had lost.  The rest of the heat was uneventful with Marty taking the top spot with 73 laps and a fast lap of 3.917 to Brian’s 69 laps and a fast lap of 4.024 and Jim’s with 67 laps and a fast lap of 3.948.

It’s unfortunate to see Jim’s race start off this way as he has been so fast and his car is so well prepared.  Brian had a good run but will need to run 70+ laps to move up in the overall standings.

Heat 2 had Marty in green, Jim in blue and Shawn in yellow.  This was a good race between Jim and Marty while Shawn was having trouble finding grip on the rear of his Porsche.  On lap 59 Marty started to feel the car loosing speed coming out of the turns under acceleration.  The problem continued to get worse and with almost a minute to go in the heat the decision was made to make a green flag pit stop to tighten up the crown gear.  The car was brought in and the adjustments made but it cost the Marty three laps.

Heat 3 had Marty in blue, Shawn in green and Russell in yellow.  Marty knew that his mechanical in the second heat would leave the door open for someone to beat him for the top spot on the podium.  With this in the back of his mind he was out to run as many laps as possible in this, his last heat.  The race was run relatively trouble free with a few de-slots but all in all it was a clean run for everyone.

Heat 4 had Shawn in blue, Russell in green and new racer Roy in yellow with his newToyota 88c.  This was one of the best races all day with each of the cars being evenly matched and the side by side racing, passing and bumping creating some real excitement.

Heat 5 hadRoy in green, Russell in blue and new racer Ary in yellow.  This was another great race to watch as the competitors were all very closely matched and were all respectful of the cars around them.  The end of the race was highlighted by a great battle between Russell and his Ford Probe and Roy in theToyota 88c.  It was fun to watch these two great drivers match each others lap times lap after lap.  While that battle was taking place Ary was using all of his driving skills to stay ahead of the battle while dealing with his cars lack of traction.

Heat 6 had Ary in green, Brian in yellow andRoy in blue.  This race promises to be another great one with all the cars and drivers evenly matched.  The action was fun to watch as there were multiple battles with the highlight being the battle between Ary andRoy.  Each driver was pushing their cars to the limit but it appeared thatRoy’sToyota had better braking and traction out of the turns. Roy was trying to find a way around the blue Kenwood Porsche but could not match Ary’s speed on the straights.  He tried to pass a couple of times on the outside in the parabolica only to get pushed out of the lane.  With the cars sliding as much as they were it was not proving wise to execute a pass on the outside of anyone.  After trying that a few timesRoy was finally able to perform a text book pass of Ary in the curva grande right before the Senna esses.   All of this close racing between Ary andRoy gave Brian the opportunity to put some time on both of them and as time expired all three cars were within one inch of each other.  The closest heat finish we have seen for three cars. 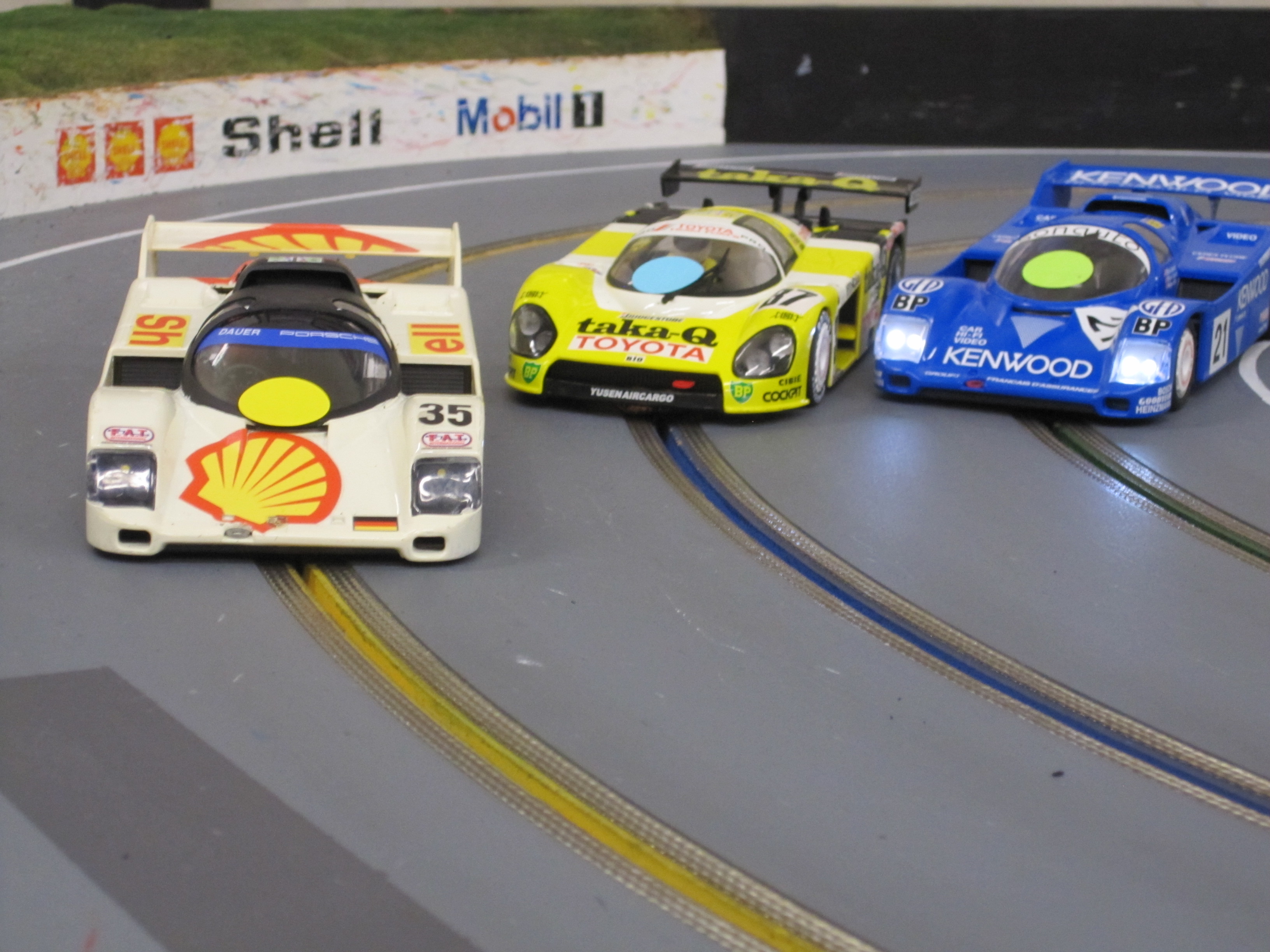 Heat 7 would have Ary in blue, Brian in green and Jim in yellow.  At this point it looked like Marty had the race locked up andRoy looked like he had second place locked up but third was wide open.

Post Race – This race once again saw the Jagermeister Porsche take the top spot with second place being won byRoy and hisToyota 88c.  It is great to seeRoy trying something new and having it work out so well.  The third spot on the podium was taken by Jim and his Miller Porsche.  Jim would have givenRoy a good run for second podium spot if he did not have the electrical issues in his first heat.

Russell’s Probe is proving to be very fast but a little bit of a handful in the turns.  If Russell can sort out the cornering he will be difficult to beat as his Probe is very fast.  Does that sound funny to anyone else?

Ary and Shawn had similar fates – both drivers are fast and both are great at setting up cars but both experienced traction issues that kept them down the timing sheets.  Both cars were fast on the straights but both needed to be quicker out of the turns.  Even with Shawn’s place finish he is still in third place overall in the points.

Brian had a fast car but had some unfortunate de-slots that moved him down the timing sheets.  He is not out of a podium spot but will need two good races in the final heats to take a podium spot.  Good luck Brian!

The next race – With the overall points picture clear at the top and very muddy in the middle there are a number of racers that can still take a podium spot in the overall points standings.  It will take some great driving and car preparation to make it happen.  I am sure we will see some great racing in the next two rounds.  Good luck to everyone!