Series Manager: Russell M.
This series will be raced in the second half of 2021 (H2).

The British Royal Automobile Club Tourist Trophy Celebration is a race for closed-cockpit GT cars in the spirit of the RAC TT races of 1960-1964. The race takes place at the Goodwood Circuit during the Revival festival and gathers together a multi-million dollar start grid for an action packed round of racing. In 2017 the Austin Slot Car Club will pay homage to it in 1/32 scale.

Fees: Entrance fee per race is $5 for ASCC premium members, $10 for standard members and $15 for non-members.

Closed-cockpit GT cars that raced the Tourist Trophy Series from 1960 to 1964.  This series is open to a good number of 60’s GT cars.  In the past cars made by Racer were eligible, but these cars are somewhat over-scale, closer to 1/30 scale rather than 1/32.  We did have a rule for track width to create a closer balance of performance for the Racer cars, but they still look out of scale.  For that reason, for this year the Racer cars will not be eligible.  The rest of the cars in the chart below are closer in size and should theoretically be closer in performance.  Also, with the cars being closer in width, it is felt that the limitations in tire size versus rear track width will not be needed.  The rear tire width will be dictated by the body width.  As this series is primarily for cars that raced in the Tourist Trophy series at Goodwood, either in period or in the revival, in general, cars that only raced elsewhere will not be allowed.  Specifically, a car like the Corvette Grand Sport is not eligible where C1 and C2 cars are eligible.  We may make exceptions, such as the Cheetah.  I don’t know if any Cheetah ever raced at Goodwood, but, as of now, they will be allowed.  The chart below is not necessarily complete; there may well be other cars that would be eligible.  Since I have not personally found details of all the cars listed, if anyone has specific information, especially if a particular model car may have an advantage due to size or other issue, or any questions or comments about any of the rules, please post comments in the Forum for this racing series: https://www.austinslotcarclub.com/forums/topic/2021-tourist-trophy-series-h2-2021/ 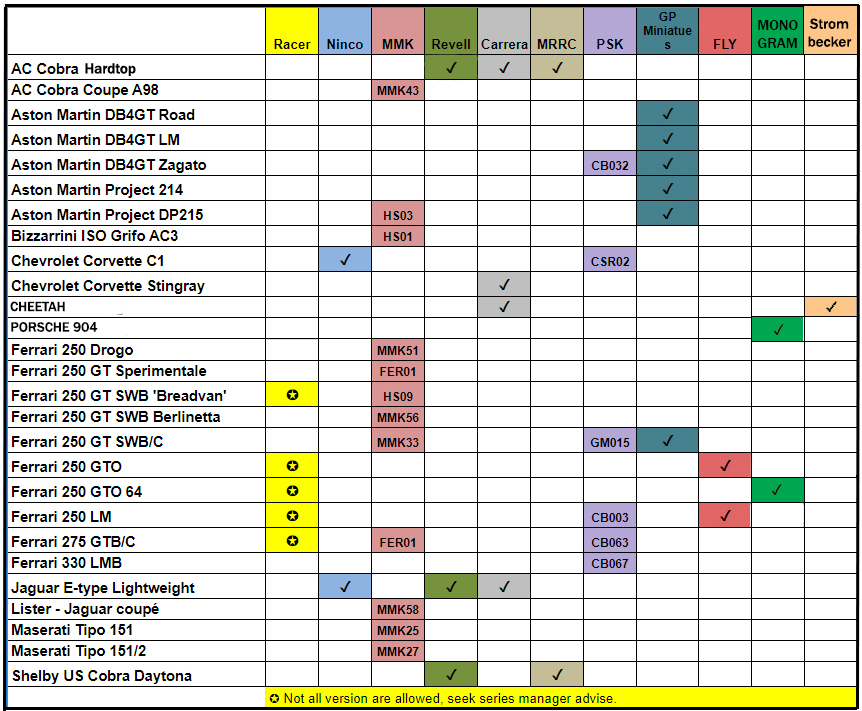 The series will be raced at 11 Volts.

If it is not mentioned it is not legal.
These rules were written to create a fair event and not for racers to look for loopholes.