The second round of the Goodwood Tourist Trophy series was another great round but was run under very different conditions from the first one.  The big difference was the weather.  Not just the weather but the effect it had on track conditions.  The temperature outside was a balmy 85 degrees while the track room was 75 degrees but the track was 84.5 degrees.  The reason for the higher than average track temp was the club mini fridge.  The fried was moved to a new location under the track and with little to no ventilation the heat builds up below the track table and heats up the track.  The high track temperature combined with 65% humidity created a situation where the track was super tight – had too much grip.  This made conditions difficult for most and affected the cars during braking and in the tight turns.  The cars were more difficult to drive and the times reflected it.  The previous weeks fast lap times were nowhere to be seen.  Drivers made numerous last minute adjustments and tweaks in hopes of finding the right set up for the super grippy track conditions.  Let’s see  you found the right mix.

Marty once again was running the Racer Racing Ferrari 250LM with the interior securely glued in after last week’s issue.  The car was fast but spent a large amount of time going down the track on is roof.  Not the fastest lap but it’s one way to get around.  Marty played with the braking adjustments and sensitivity but nothing would settle down the Ferrari.  Marty finished with a total of 207.9 laps and a fast lap of 4.106.  Even though the lap total was a full 4 laps down on last week’s total it was still enough to give him the win and his 4.1 second lap was the fastest of the day.  The result put Marty in first place overall in the series and four points ahead of second place. 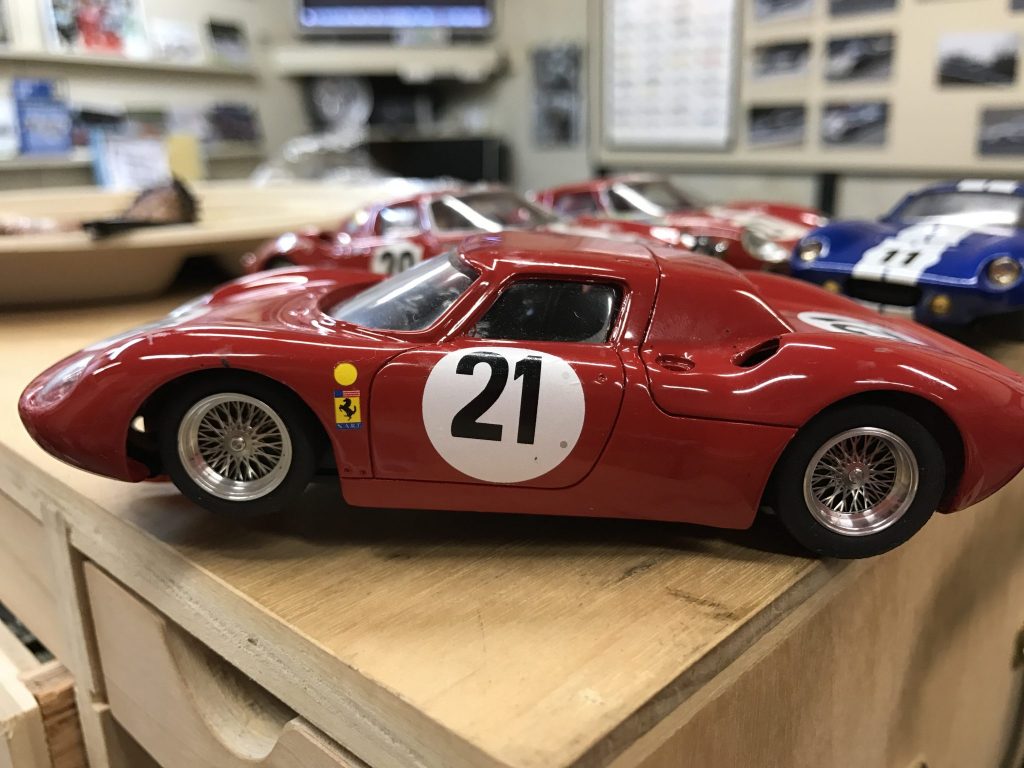 Russell tried a couple of different cars from his classic garage before settling on the Fly Ferrari 250LM built on a Slot It GT40 chassis.  The car was fast and stable and of course Russel is a great driving made the car a top contender.  Russell finished in second place with a lap total of 204.42 and a fast lap of 4.208.  Russell’s second place finish put him up to second place in the overall standings. 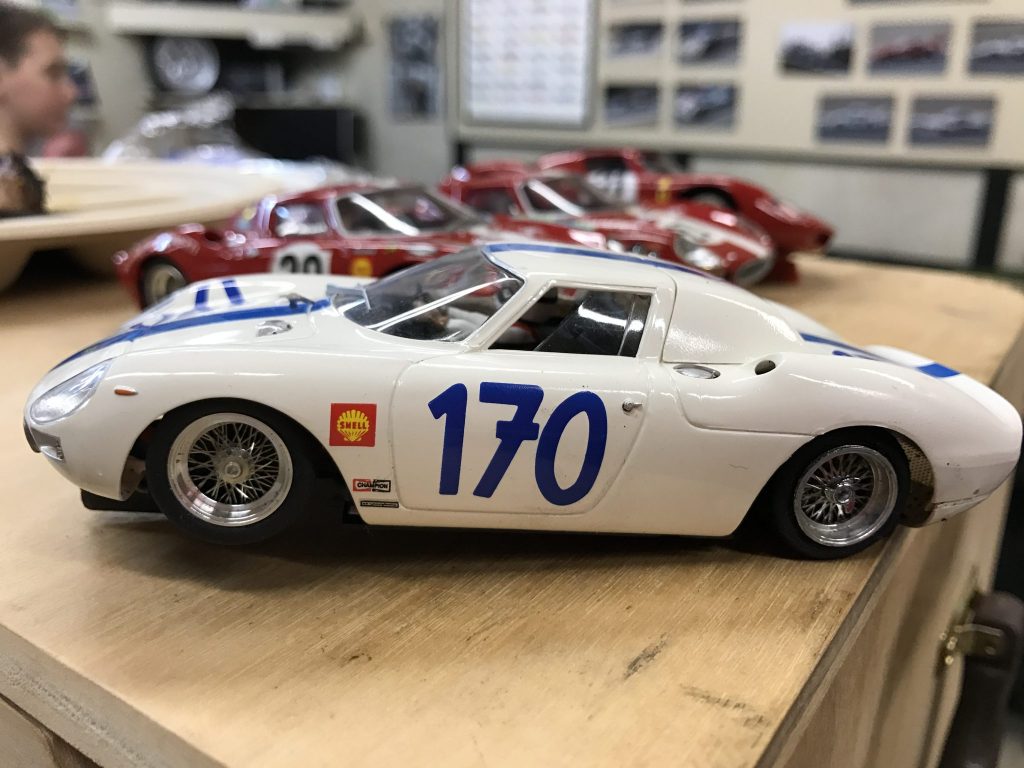 Jordan was running the full on Racer Ferrari 250LM that he used in the last round but this time the stock interior had been replaced with the much lighter lexan version and the sidewinder motor pod was replaced with an in-line version.  The difference was huge and the car was much more stable and easier to control.  The result was a great third place finish for Jordan with a lap total of 204.22 or just .22 of a lap behind Russell.  Jordan’s fast lap was a 4.203 or just 0.005 seconds quicker than Russell’s.  The great result moved Jordan up to fifth place overall. 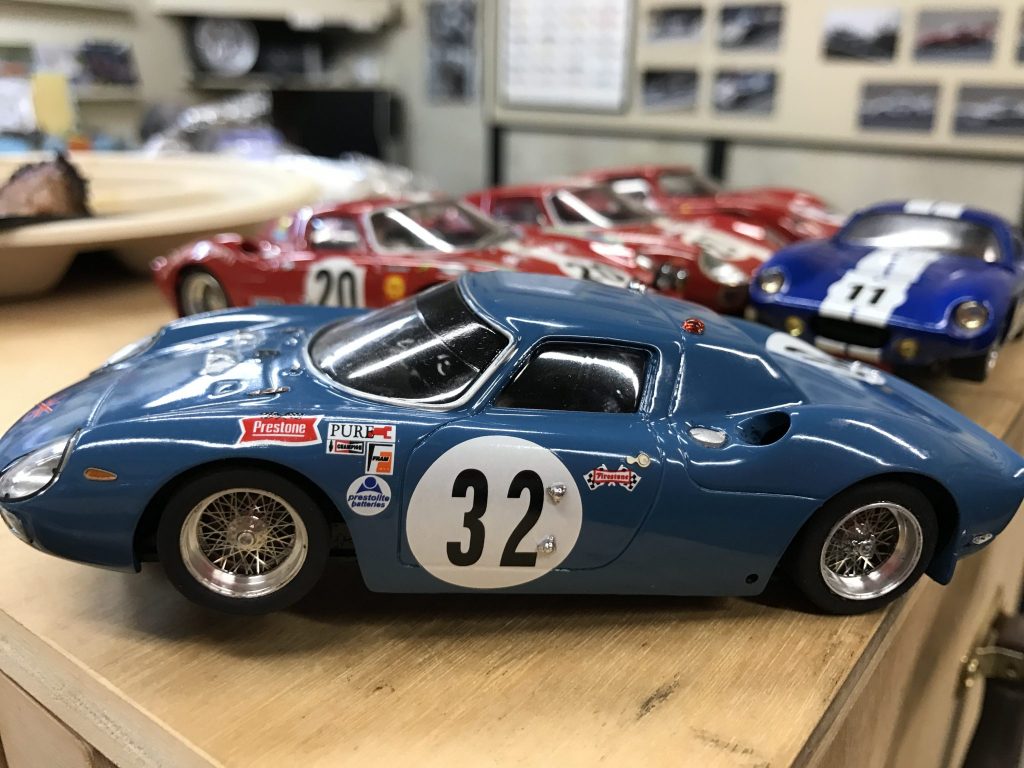 David was once again running his Racer racing Ferrari 250LM that was very similar to Marty’s.  David was having issues with the track grip and could not get his car to be stable under braking, especially heading into turn one.  David tried to remedy the situation between heats but was only able to run 198.25 laps and have a fast time of 4.203.  David is now third overall and not very far behind 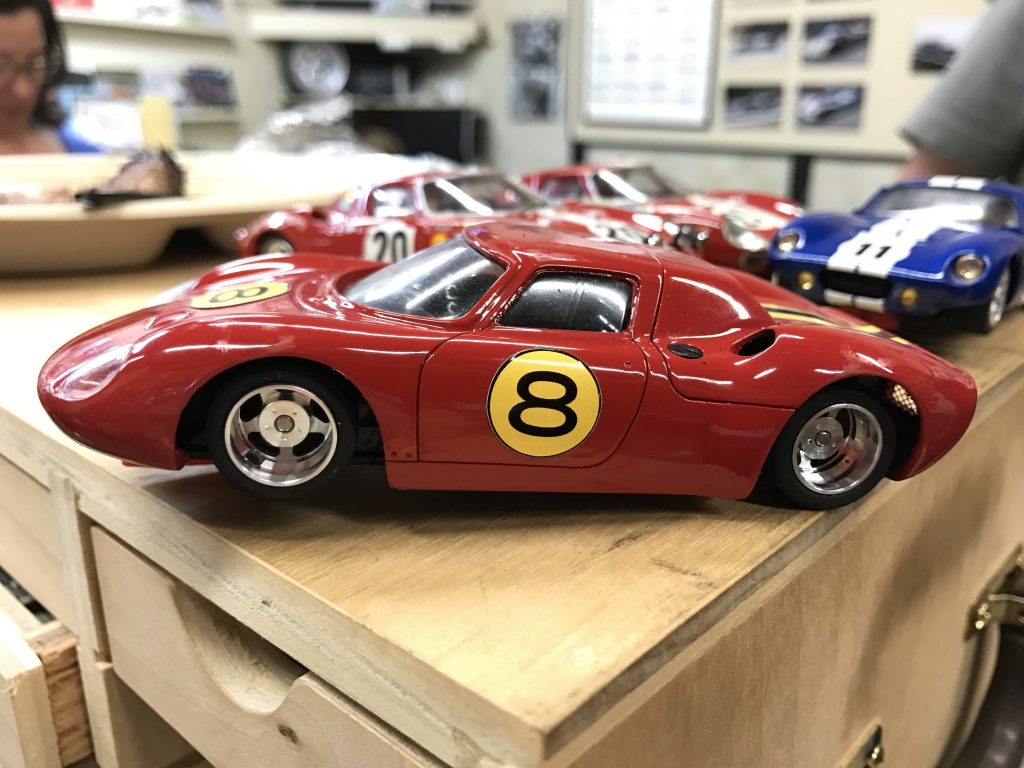 Roy – Roy was running the same Fly Ferrari 250GTO from the Russell Mill garage.  He had another strong race and finished in fifth overall with a strong run and a lap count of 195.4 and a fast lap of 4.278.  This result puts Roy in sixth place overall in the series. 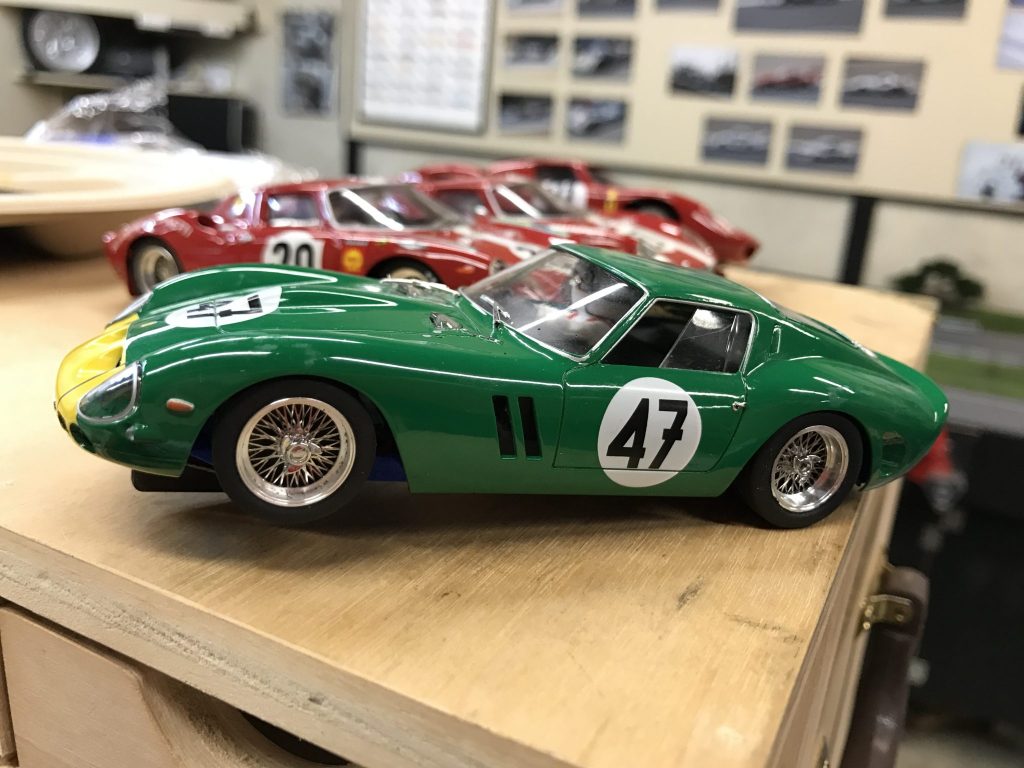 Shawn was racing a beautiful Jaguar from Russell’s classic garage.  Even though the car was completely new to Shawn he did a great job of keeping the cat under control.  The first heat with the car had a steep learning curve but the second and third heats were great with Shawn having very few de-slots.  He finished with a very respectable total of 195.05 and a fast lap of 4.323. 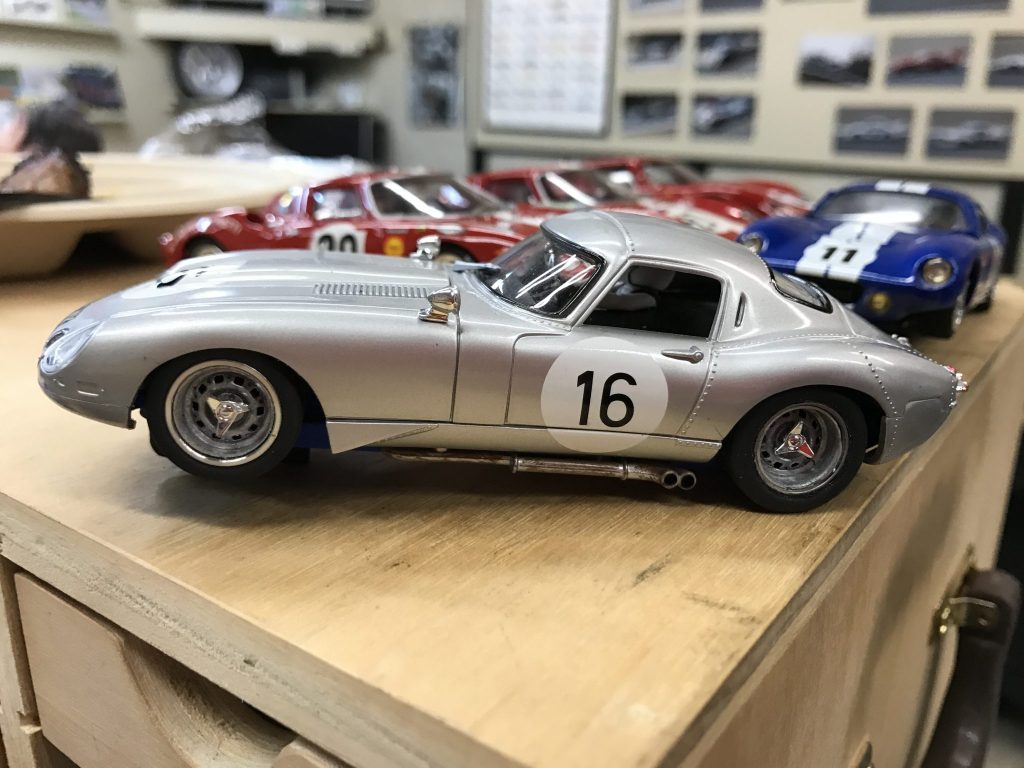 Ary brought out his beautiful resin Shelby Daytona Cobra in place of his super fast Fly Ferrari 250GTO he ran in the last round.  The car was beautiful but was unable to match the speed and handling of his previous runner.  Ary did everything he could to keep the car in the running but with track conditions being what they were it was not to be.  Ary finished with a total of 192.4 laps and a fast time of 4.402.  Ary is in fourth place overall and I am sure will be back with a faster car in the next round. 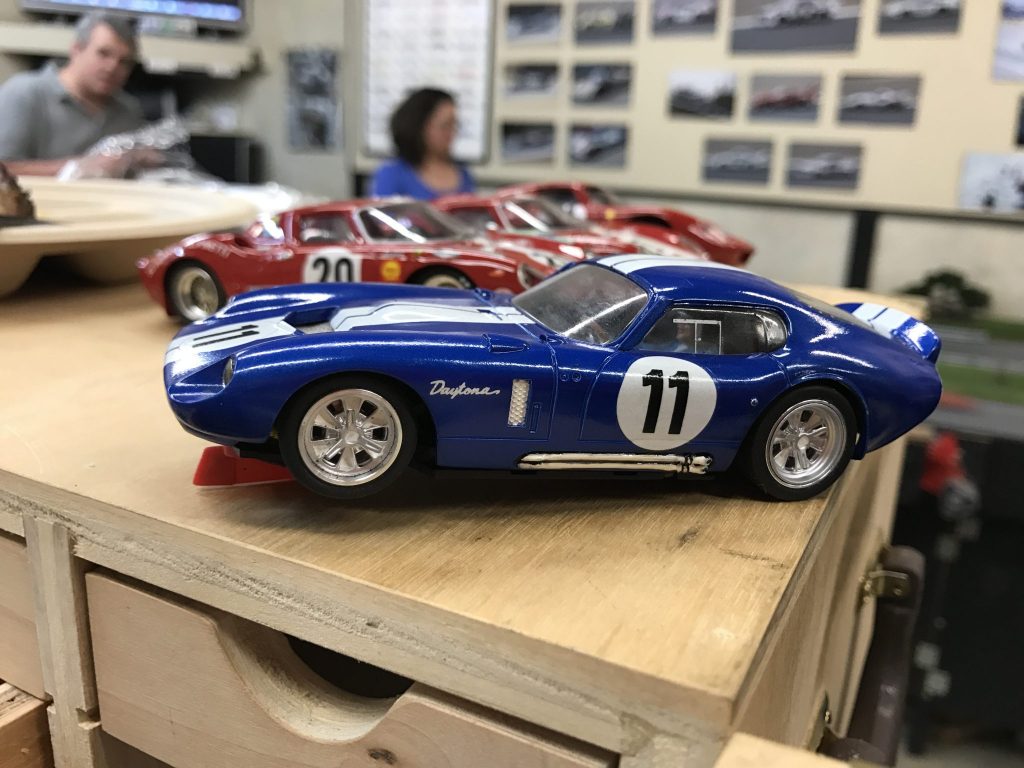 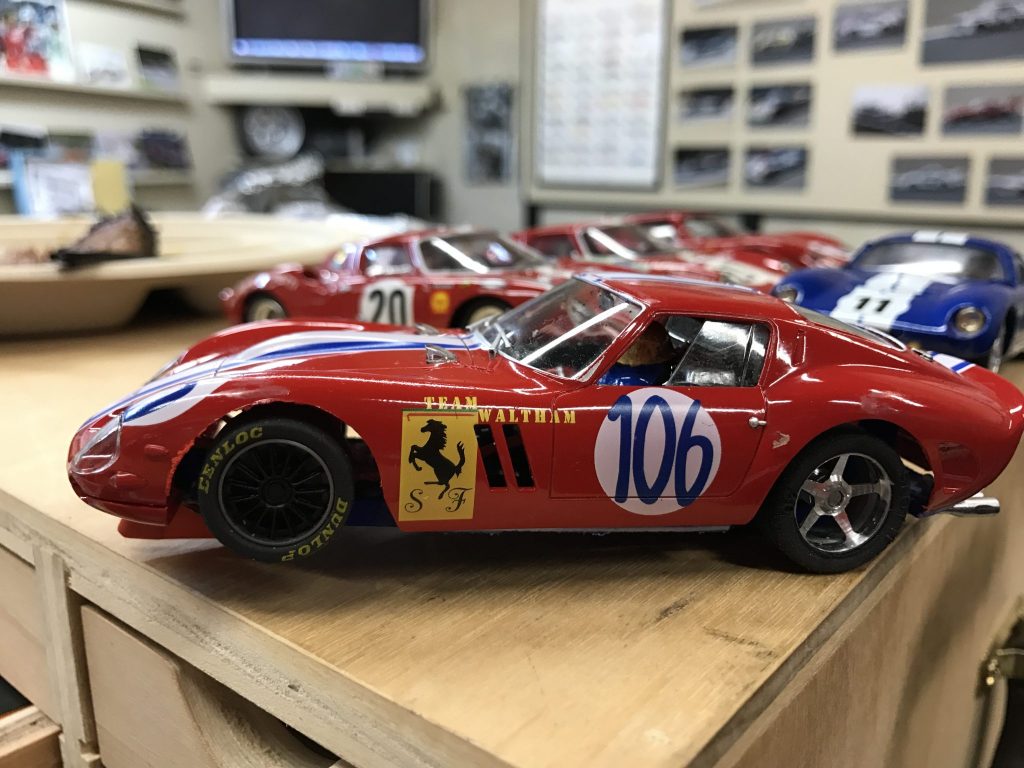 Randy had a strong race and finished in second with his gorgeous Racer Ferrari Silverline 275GTB.  Randy completed 184.75 total laps and had a fast lap of 4.547.  Randys strong result moved him into second place in the overall standings.  Nice work Randy. 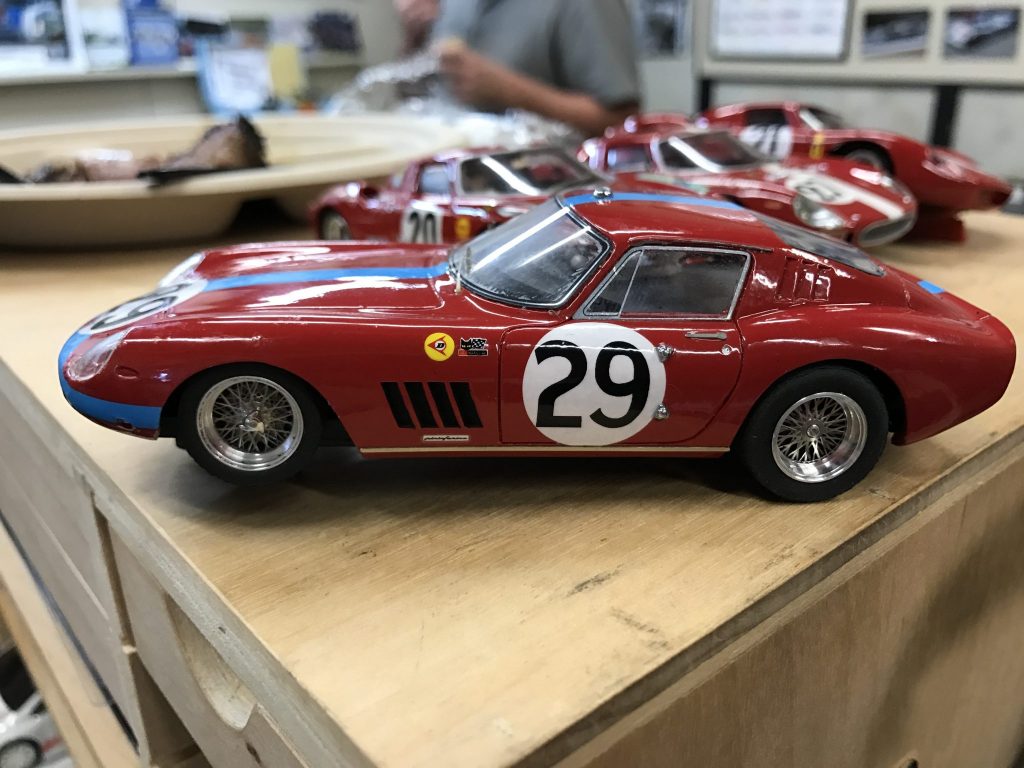 Brett was running his beautiful Fly Ferrari 250GTO with Olifer chassis.  Brett had some issues with his controller in the last race and has a better handle on what settings to use for his Fly Ferrari.  He had a solid race with a few de-slots but nothing major.  Brett managed more laps in this race over the first one and that was with the difficult to deal with track conditions.  I bet Brett’s next round will be even faster.  Brett finished third in the B Group with a lap total of 176.55 and a fast lap of 4.586.  Brett is in fourth place in the overall standings. 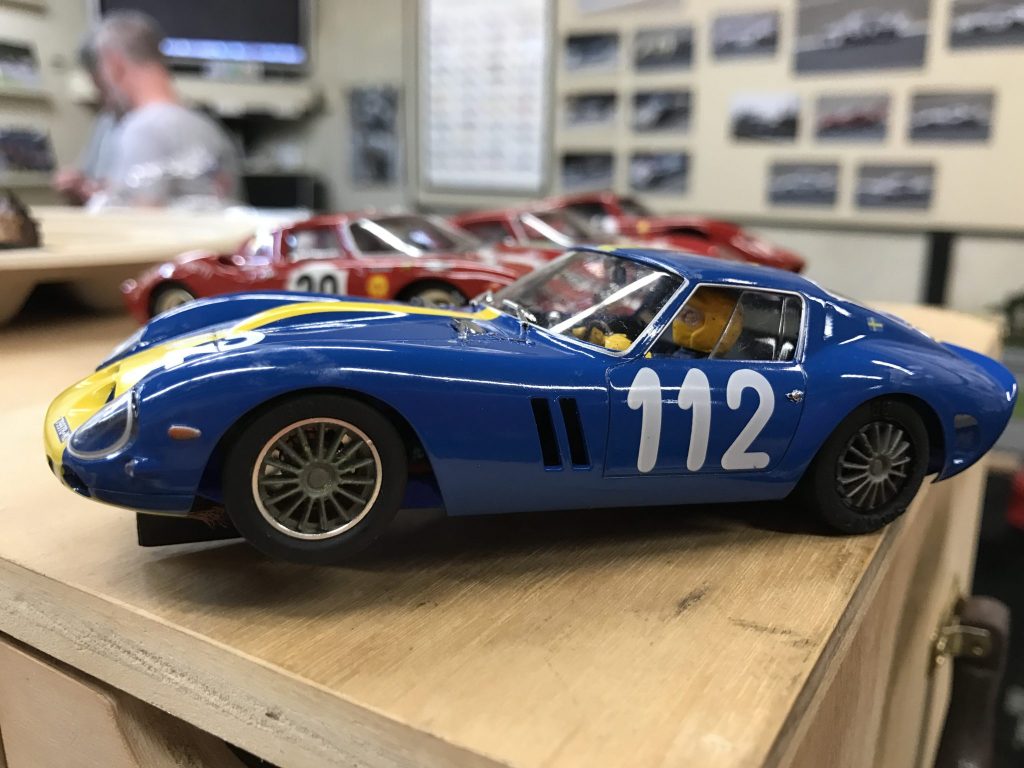 John was running his Racer Sideways Ferrari 250GTO and although the car was looking good in the pre-race warm up the car was a handful during the race.   John finished in fifth place in the race with a lap total of 170.90 and a fast lap of 4.417.  He missed the fast lap by 0.017 seconds.  John is third in the overall standings only five laps behind Randy for second place. 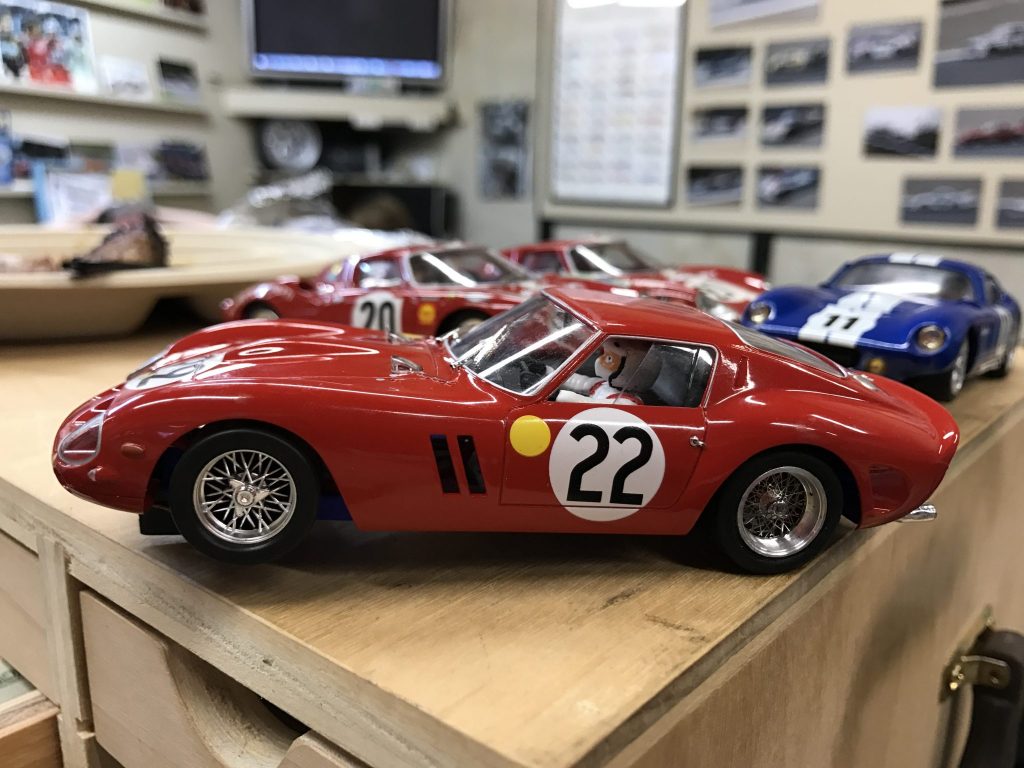 Rich was trying again with a different car – this time a Monogram Jaguar with round tires as opposed to those on the Monogram Corvette Gran Sport he ran in the first race.  The Jaguar was fun to watch but difficult to drive.  Shawn was running a similar Jaguar but had a different chassis and more weight.  Rich’s Jaguar managed 150 laps with a fast time of 5.143.  Rich was now in 5th place overall in the B Group racers.  Rich can only go up from here.  He’s a great driver but needs a car to show what he can do. 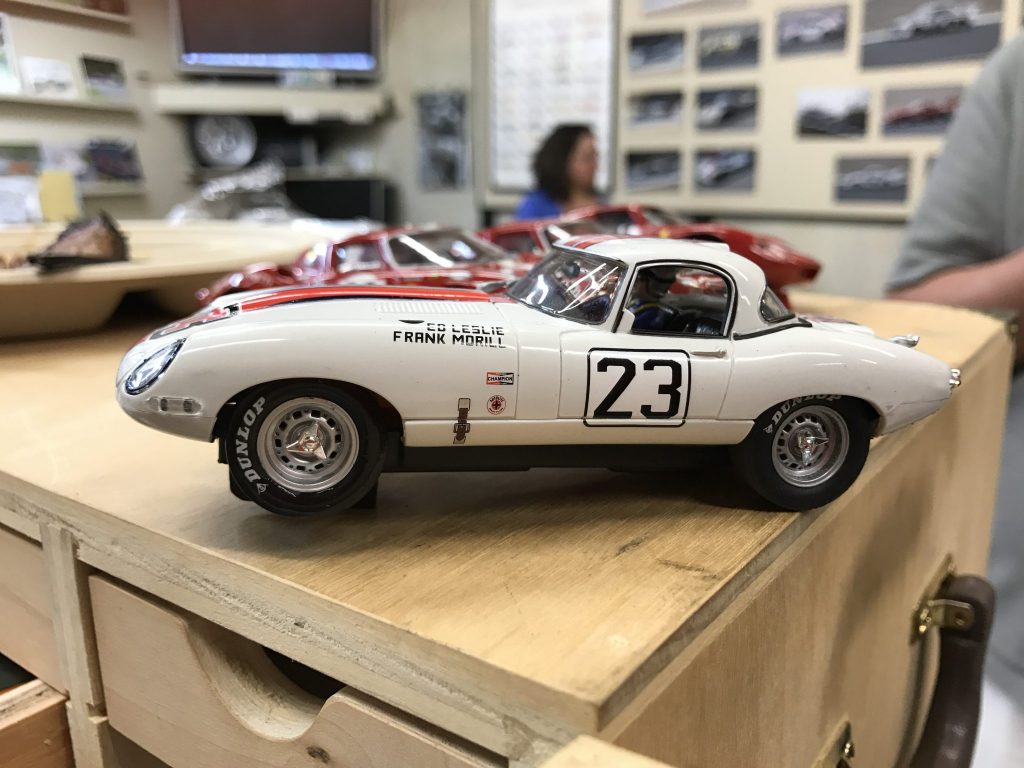 There was lots of great racing with beautiful cars.  I am sure the track conditions will be different and the cars that run will change and improve for some of the racers.  I am sure it will be fun to watch.  I can’t wait.