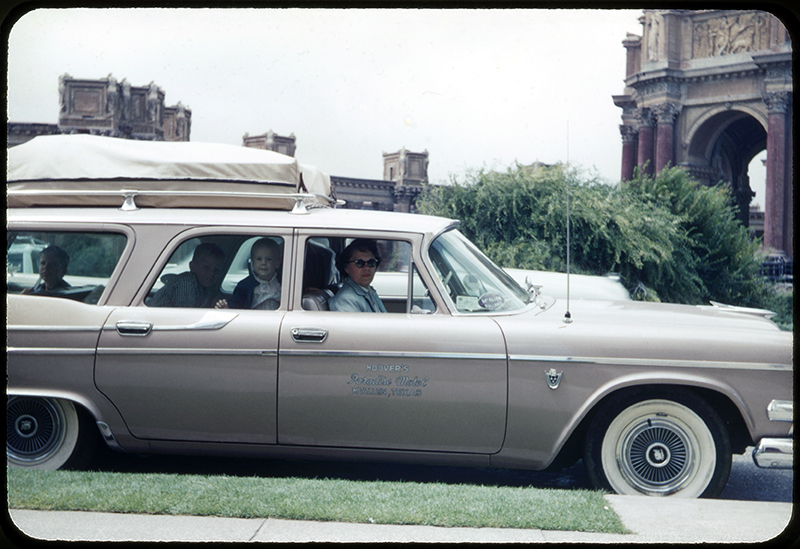 With the Vacation movie marathon recently on television, I caught the first one again.  The movie touched on so many boomer vacation memories.  The photograph above was taken on our family’s second west coast trip in 1959.  At the time we lived in McAllen in the Rio Grande Valley and my father’s family was scattered along the California Coast.  McAllen is 800 miles from El Paso, so it was a very long trip just to get out of Texas. And there was no Interstate 10 in the Fifties—two lane roads the whole way.

My father loved the car in the photo—a 1958 Dodge Sierra station wagon, with a D500 engine.  This was before my driving days so I never got to drive it, but my father was highly impressed with the engine.  I do not know if it was the single four barrel or the two four barrel version.  The car also had dual air conditioning, with a second evaporator in the ceiling, between the second seat and the third, rear-facing seat.

I think my father was Clark Griswald.  He had a canvas bag made to fit the full-length roof rack.  We started the trip with my parents, brother, and sister and picked up my mother’s parents along the way.  Somewhere in the Southwest, we had an incident on the highway.  As in the movie, I think the family must have been sleeping, because my father had to relate the story when we stopped.

We were passed by a couple of young guys in a new Ford sedan.  They pulled around us, then slowed down.  After a while, Dad passed them again, and, sure enough, they came back around and then slowed down.  We were coming to a long grade up a hill and Dad waited until we started up the hill.  He gassed it and pulled out, blowing past the Ford.  He said we were doing 90 miles an hour when we crested the hill, the Ford well behind.  (90 miles an hour…….).  The Ford fell back and did not challenge again.

When we pulled in to a gas station in the next town, and the seven of us all piled out of the car, Dad said he saw the Ford drive by slowly, the occupants staring open-mouthed.