Dallas Slot Cars had a “Texas Shoot Out” or an event with a similar name Oct 23, 2021. I joined six other guys who regularly race at Tom’s Capital City Slots in Pflugerville. Most drove up on Sat morning (which is a 2.5 – 3hr drive) but I came up Friday night, stayed at a hotel about 1 mile away from the track.

The new location is a warehouse in a business-park, and much closer to the nearest freeway so it’s easier for out-of-towners to locate. Inside it appears visibly larger (b/c a taller ceiling), but floor-space is actually smaller and they disassembled the green/yellow Tri-Oval (and are trying to sell it).
One thing very noticeable was the “rental-pits”. The road-race guys have about 6-8 very simple pits, (not sure what they are paying) BUT – along one wall are the Drag rental-pits, (for $150/ea, per year!? – a bargain). Many have cabinets, signs on the wall, various equipment, and many look like offices! Jay said they have steady grudge-match drags each Thurs night and mains each weekend. The race fees pay the rent and operating profit (i.e. $5/car, averaging 150-250 cars each weekend ($750 ~ $1,250 income/weekend).
Jay still runs the well stocked retail store, Shontel is still Race Director and head “momma”.

1-NASCAR Modern-COT, flexi-chassis with “FK” style motors (either a set of 48 to 55k closed can motors; or open-can Pro-Slots rated at similar RPMs).
Most people had dedicated chassis, but as needed the same chassis could be run for both series. The only major difference was that the NASCARs had a minimum weight of 100gm, so racers with light-weght chassis (like myself) needed to add 15-30 gm of ballast!

NOTES: Many racers from the Tyler club came, but Chris and Dave had to leave early.

RESULTS
Like ASCC we had two ‘groups’, basically split along qualifying times. I was in the first/lower group as most of the non-locals; and as can be expected, crashes were common.
In NASCAR, I was averaging p3-p4 (because I had few personally caused de-slots) but in the 6th heat (of 8) I was rammed by a Rider and my motor’s mounting was completely ripped off. Dave from Tyler tried to help me re-solder but his flux was not compatible with the rosin-core solder I used and we could not get the motor to keep its mounting, (so I missed heats 7, 8). So, re-soldering that motor is a project for the holidays. [Electrical rosin-core solder is used for motor mounting – because it is less brittle than Acid/silver solder (which is stronger and favored for various Chassis components (e.g. axle-bushing pillars and forward uprights or pan-bayonets)].

My LMP race was much better. I was very steady and passed thru a few brutal crashes under the bridge, and placed p4 in my class of 9; and p13 out of 19 over-all.
Not podium, but NOT DFL, and better than a few of my 1-24 compadres who usually place much higher at Tom’s track. I drove home feeling satisfied, esp. after placing P4 out of 11 the previous Weds. 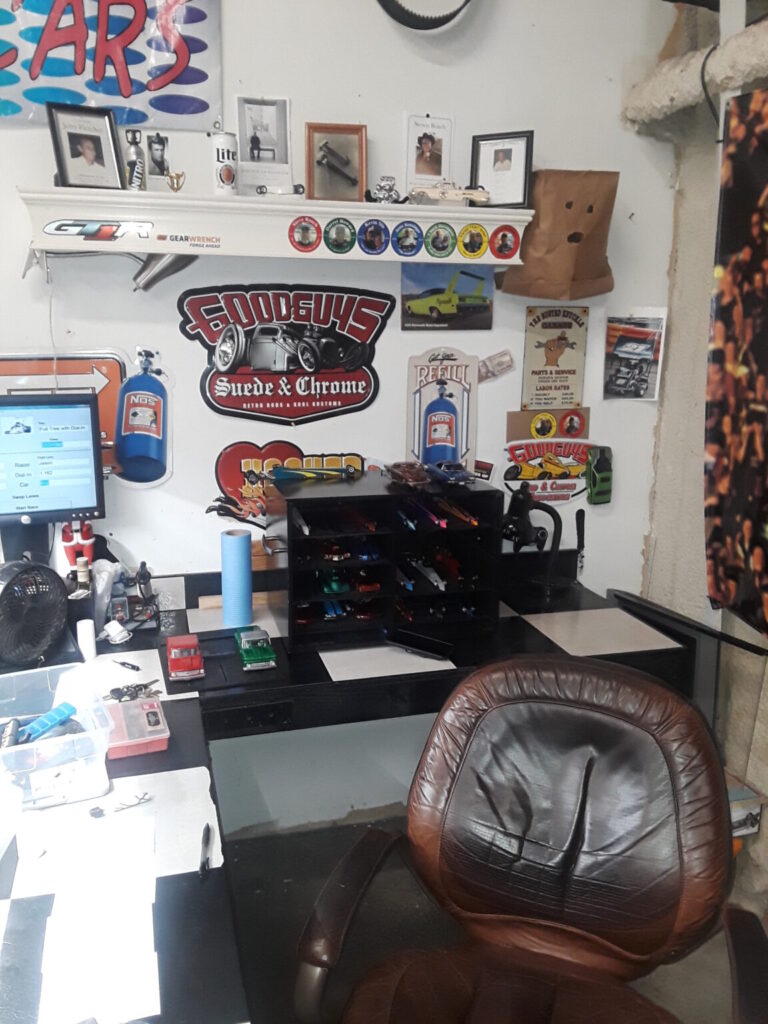 a) Local racer “MO” in the background; b) Drag Fleet for a couple pitting across from my pit. 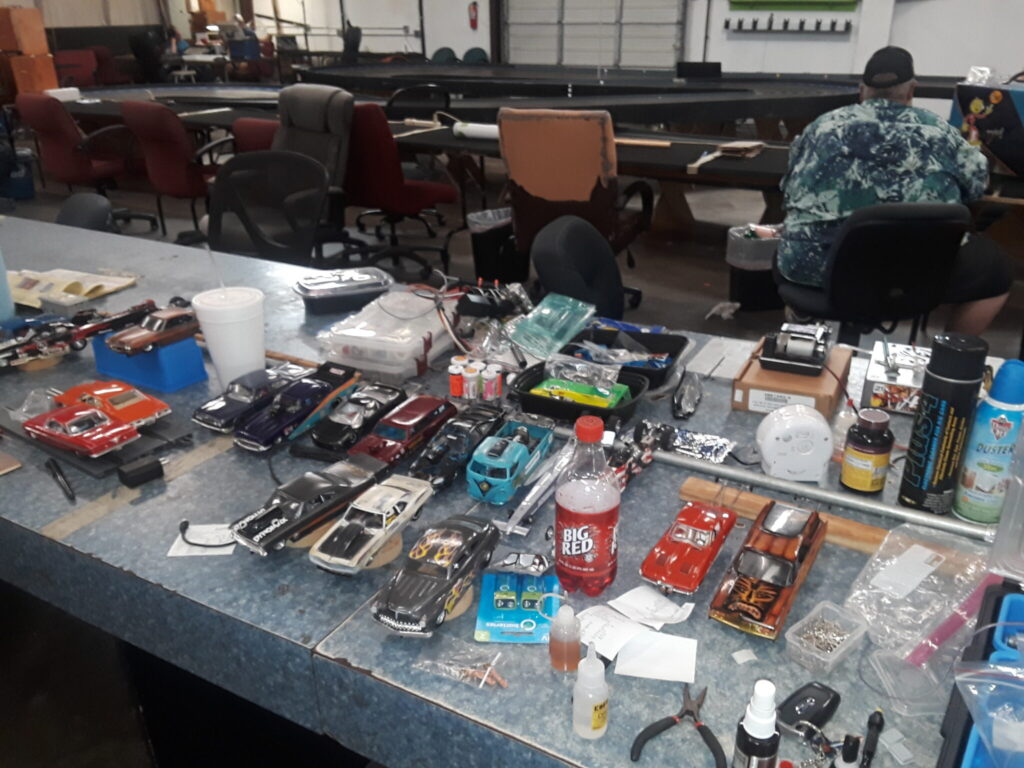 The Lineup for ‘A’ (slower) group LMP