The first round of the clubs RevoSlot Porsche GT2 series took place this past Saturday the 6th of January. 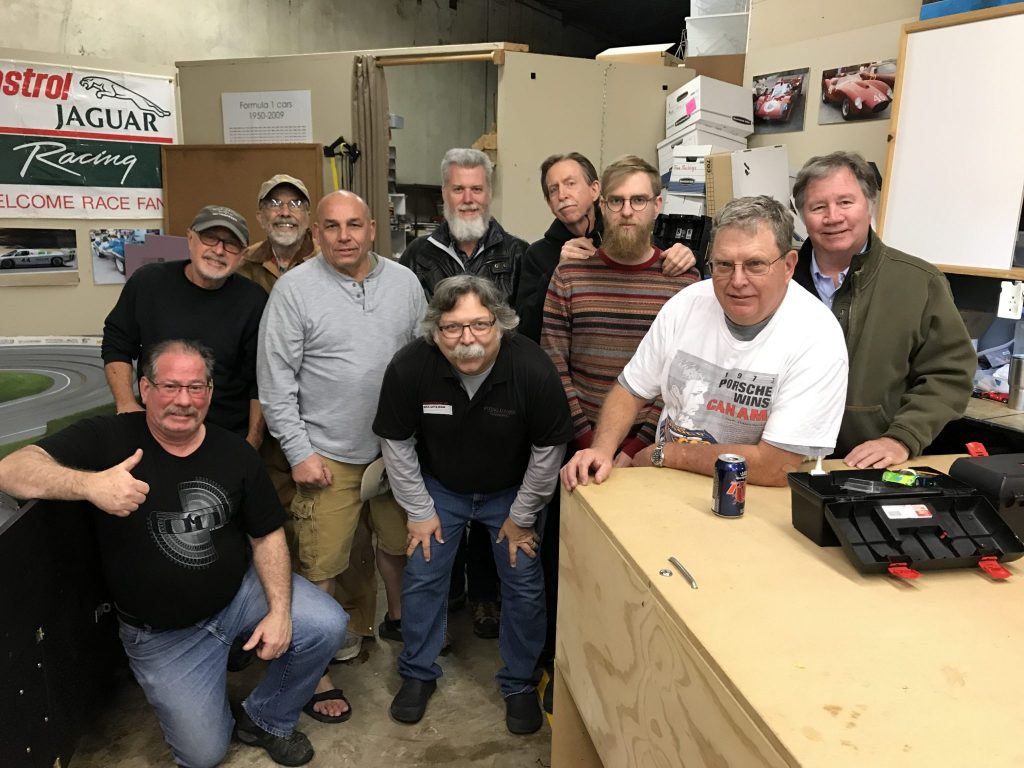 This was the first series of the year, the first time the club have run the new RevoSlot cars in anger.  Everyone was looking forward to running these very cool new cars that are for the most part easier to set up.

The series was built to run as a stock series to make it more of a driver’s series and less of a builder’s series.  Having said that, the amount of preparation of the stock car was totally up to the participant.  There was the normal truing of tires and the break in of the motors and gears but then some took it to a higher level with aligning the axle holders, gluing down the motor wires so they would not rub on the front axle and then there were the extremist that were cleaning out the bearings and putting in a lighter weight oil.  All done with the goal of creating the fastest stock RevoSlot Porsche GT2. 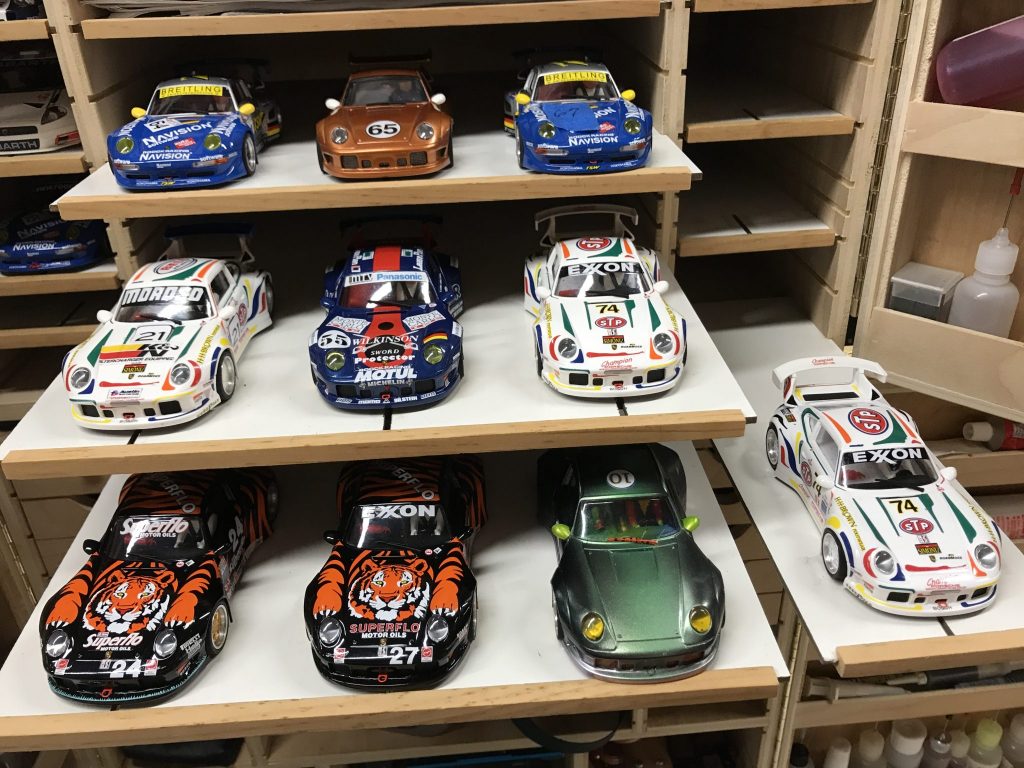 The day of the race was cold with track temps in the low 60’s and the ambient in the low 50’s.  This was combined with 60% humidity.  Both of those mixed with the stock shore 30 tires made for some tail happy racing.  It was apparent in the pre-race warm ups that you would have to pick your place to pass and not pass on the outside of someone in case they would swing wide. 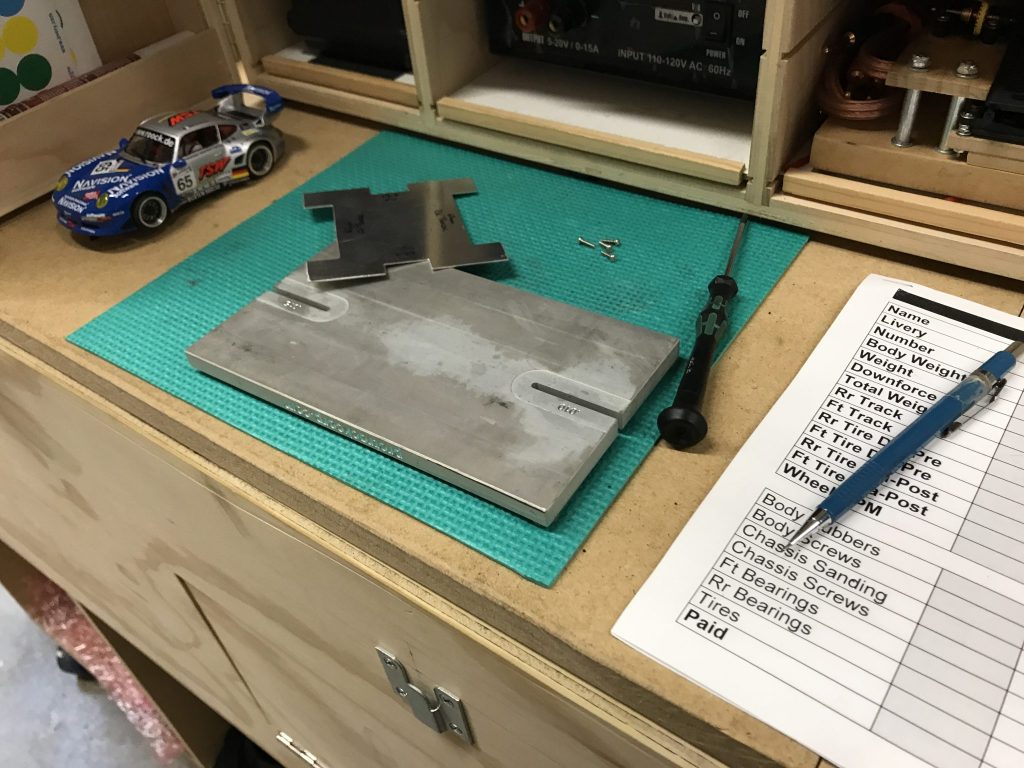 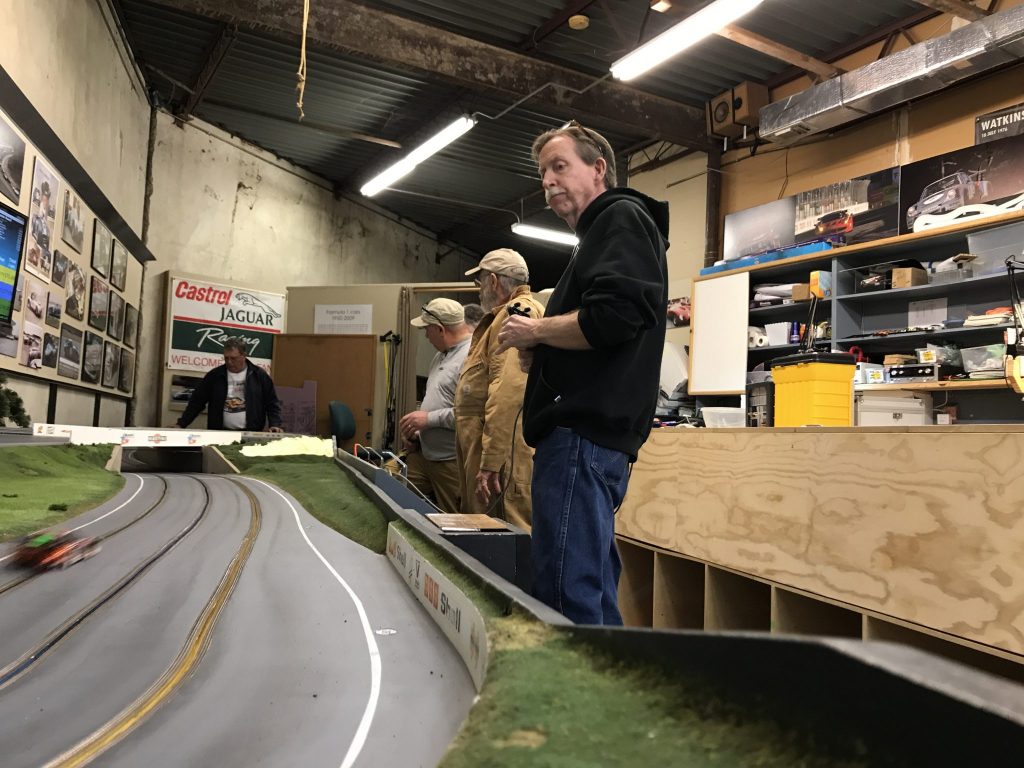 One of the best parts of tech inspection was the sharing of ideas between all of the racers.  It was obvious that some racers had put more time into preparation and set up than others.  The key here was all the ideas were shared with the goal of making all the cars more competitive and for the racers to get a better idea of what can be done to a stock car to make it run better.

Why were we checking the cars so thoroughly?  Because this series is an absolutely stock race and any modifications outside of the rules could be used to unfairly improve the performance of a car.  Any small difference outside the rules is still a difference and could affect performance and give a racer an unfair advantage.  The rules were posted five weeks in advance to give everyone ample time to read, understand and build a car that would be in compliance.

The racing was fast right from the start with Marty setting a fast lap of 3.868 but not too far behind was David with a 3.933 and Alejandro was working hard to get his car in the low 4.0’s.  There was not as much door to door racing as we were thinking there would be but this was just the first heat of the first race in a six race, eighteen heat series.

The second heat had Jordan join in and as is always the case with him he was fast from the start.  He had a fast lap of 3.896 and a lap total of 73.  Alejandro had fewer deslots and equaled Jordan with 73 laps.  Marty was two laps in front with 75.

The third heat had Mark join in.  This was Mark’s first race as an A Group racer.  Mark was having some control issues with his car and finished with a lap total of 65.  Jordan ran fast and ended with a total of 73 while Marty finished with 74 laps and a new fast lap of 3.862.  Marty’s three heat total was 223 laps. 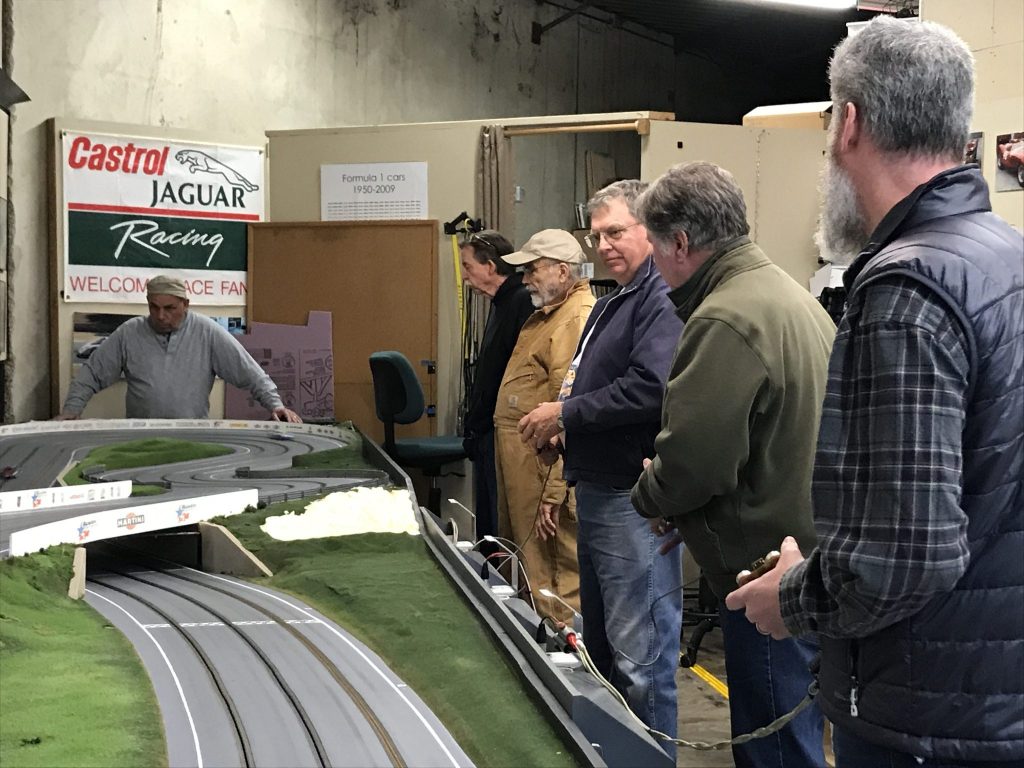 The fourth heat had Roy join in.  Roy did not just join in, Roy raced in.  Roy’s car was super fast and very stable.  As a matter of fact, it might have been too fast for Roy and his return to the club after being away for the past 11 months.  Roy was having some difficulty dealing with the speed of his car but when he kept it in the slot it he was crazy fast.  In just his second lap of running he almost equaled Marty’s fast lap time.  Roy finished the heat with only 72 laps run but a fast time of 3.866.  Jordan ran a great heat and finished with 74 laps and a three heat total of 220.  Mark was getting quicker and ran 68 laps.

The sixth heat had Shawn join the group.  Shawn’s car had little prep time but his knowledge of the track helped him end up with 71 laps.  John had another strong heat running a total of 70 laps while Roy was only able to run 72 laps but did manage to amaze everyone with his absolute fast lap of 3.800.  No wonder he was having trouble controlling his car.  Running a 3.80 is crazy fast.  He finished with a three heat total of 219 laps. 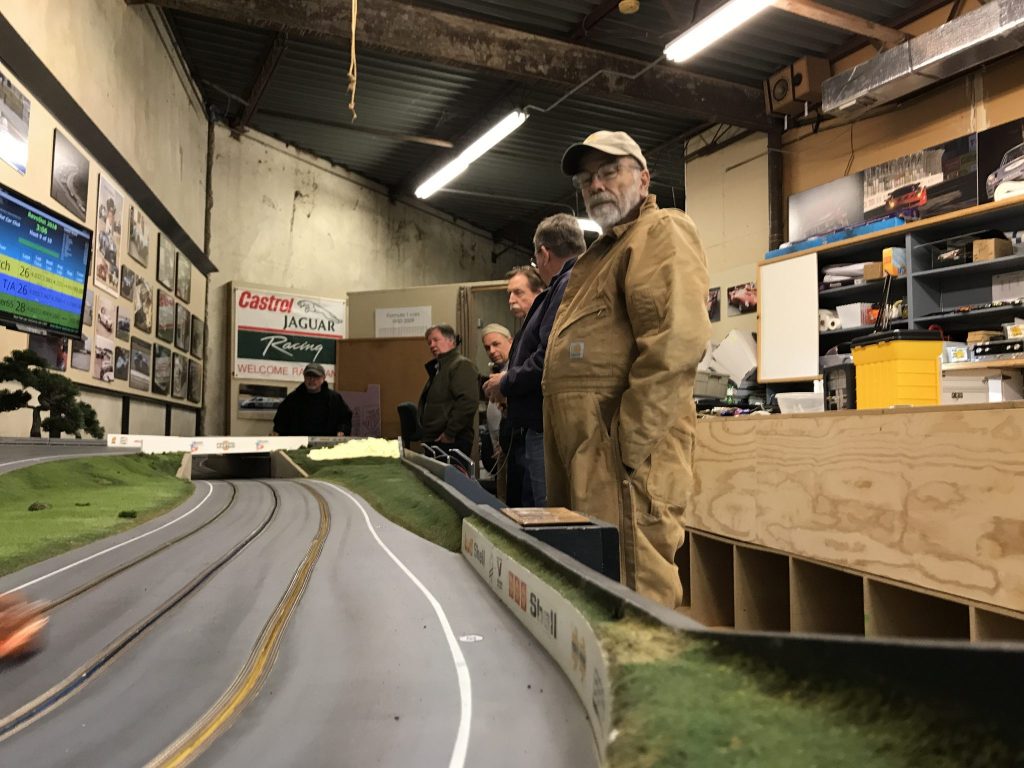 The seventh heat had Randy join the group.  Randy ran a solid 67 laps and had a fast lap of 4.038.  Shawn had a better heat and managed 72 laps and John finished with 70 laps and a three heat total of 211 laps.  That was John’s best lap total since running with us – Congratulations John, nice work.  Now you have to do it again!

The eighth heat had Russell and his beautifully finished car running.  The car was pure show quality both on the outside and the inside.  You have to look close but the finish work extended to the fully instrumented dash board, painted wheel nuts, engine cover, painted and trimmed lights and more and more.  I could not bring myself to run a car that looked that good but Russell is a different cat. 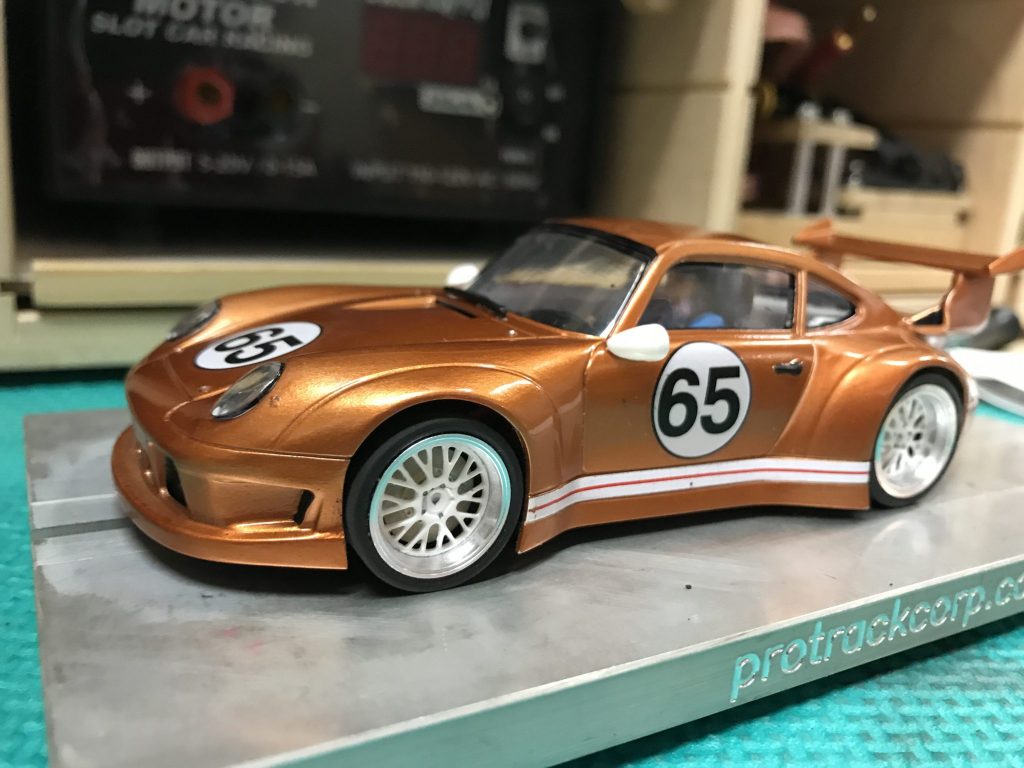 Now with all that beautiful finish work there is no way the car would run fast as all the time was put into the finish.  WRONG!  Russell’s car was as fast as it was beautiful.  In his first heat he ran 74 laps and had a fast lap of 3.886.  Randy had a great heat with a lap total of 72.  Maybe he was pulled along by the slipstream of Russell’s car?  Shawn had a lap total of 71 and finished his three heats with a total of 214. 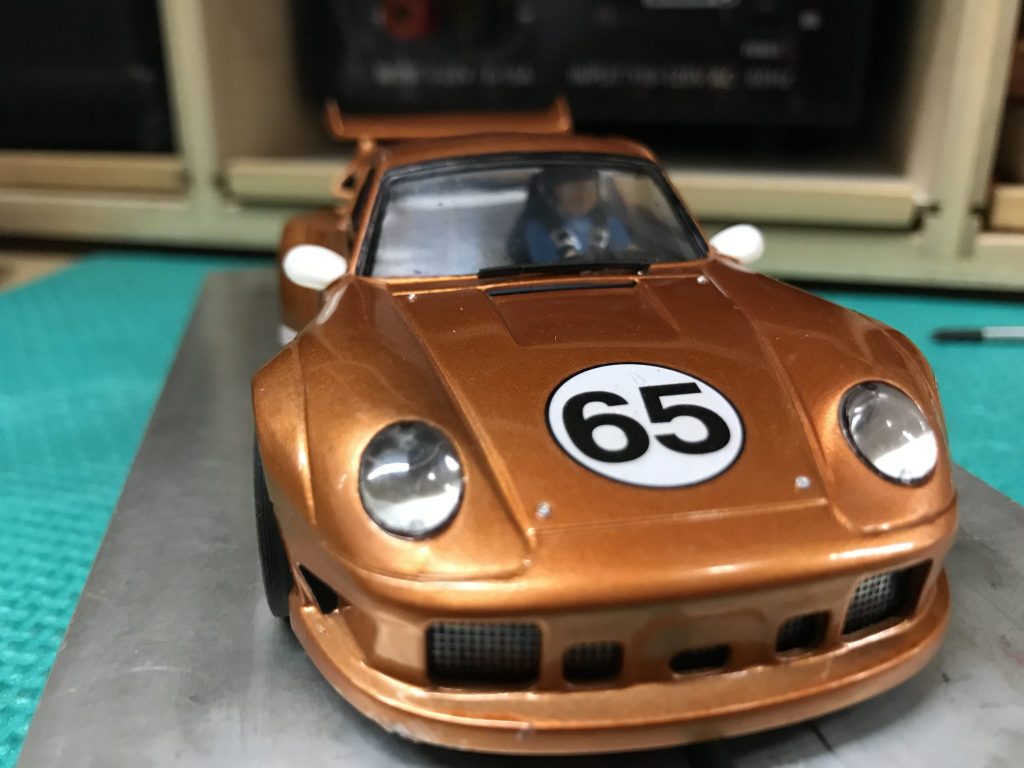 The ninth heat had David join back in after his strong heat earlier.  Russell continued to run strong with a total of 74 laps.  Randy finished with 70 laps and a fast lap of 3.947.  His three lap total was 209. 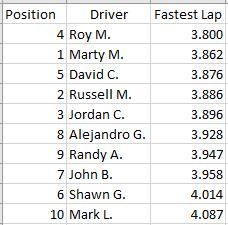 Now it was time for post race inspection.  This is something new for the club but something we are doing for this series to make sure the cars are following the rules and are as equal to each other as possible.  Post race inspection starts by measuring  the outside diameter of the front and rear tires to make sure they are not too small and in violation of the rules.  We then measure the front and rear track to make sure the cars were not running a setup that was too wide and outside of the rules. 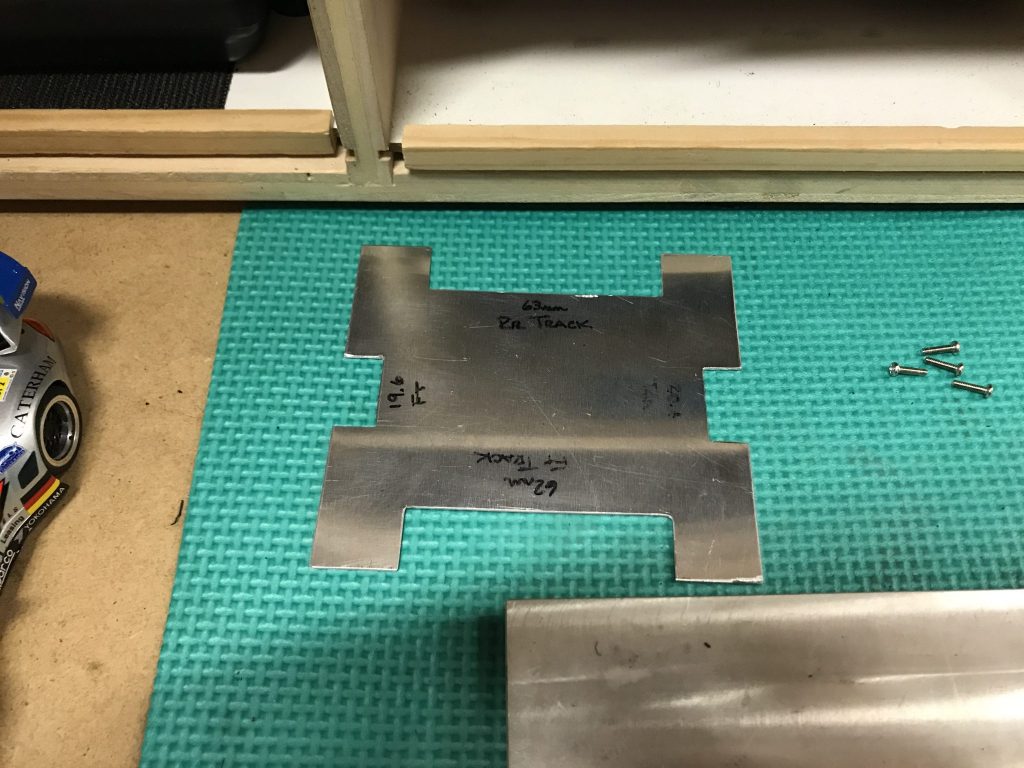 Believe it or not there were four cars in violation of the rules.  Two for undersized rear tires and two for wheel track measurements that were too wide.  Now what to do?  It is the belief of the series manager that the rules were not broken intentionally, and the cars would be allowed to keep their points – the race results were to stand as they finished.  Having said that – no car will be allowed to compete if it is in violation of the rules and any car found to be outside the rules in post race inspection will be disqualified.  Plan accordingly.

One of the issues club members expressed to the series manager is the lack of parts, specifically tires.  It appears that 132slotcar and all of the other on-line shops are out.  Members were having to have tires air freighted in from Europe to meet the demand.  I hope the parts availability situation improves soon as these are fun cars to run but they do, like all race cars, eat up parts.

The next round of the series should see much closer racing as the tips and secrets of car set up were shared among the group.  Racers now know what times everyone is running and what the benchmark is.  The next round should be something really special to race and/or watch.  I can’t wait. 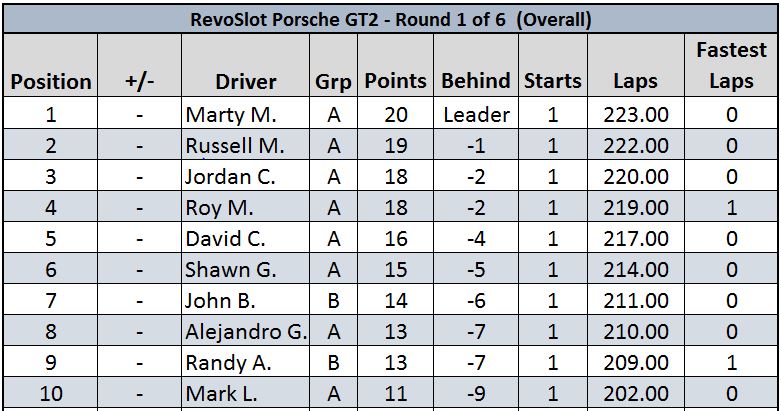 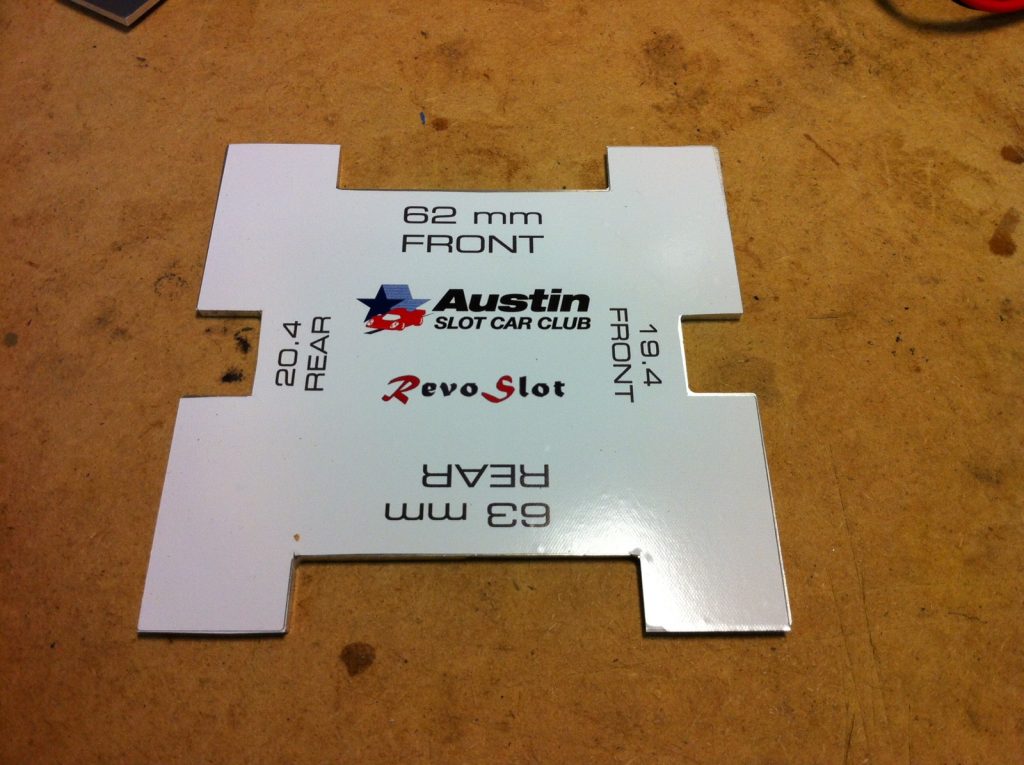 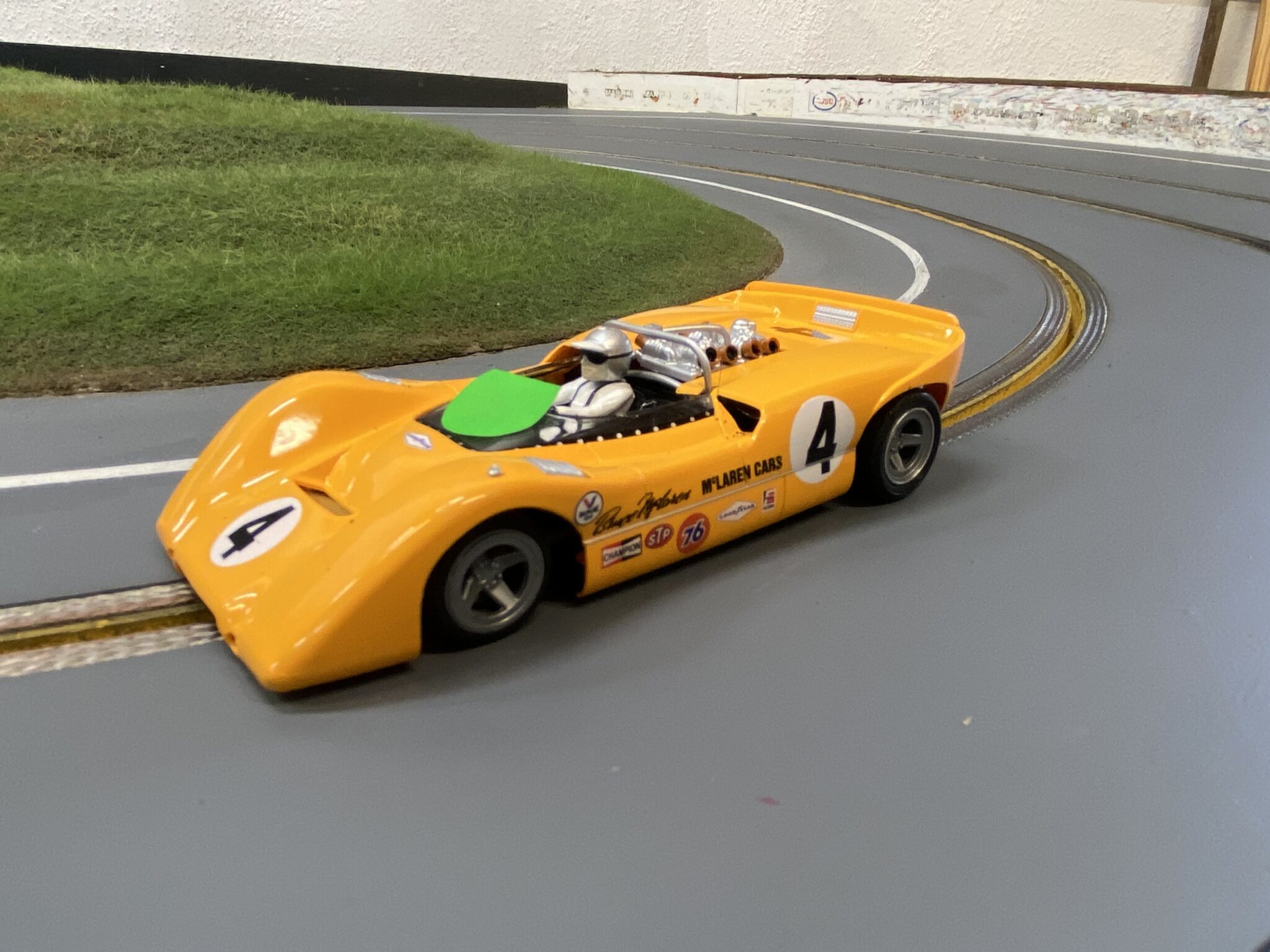 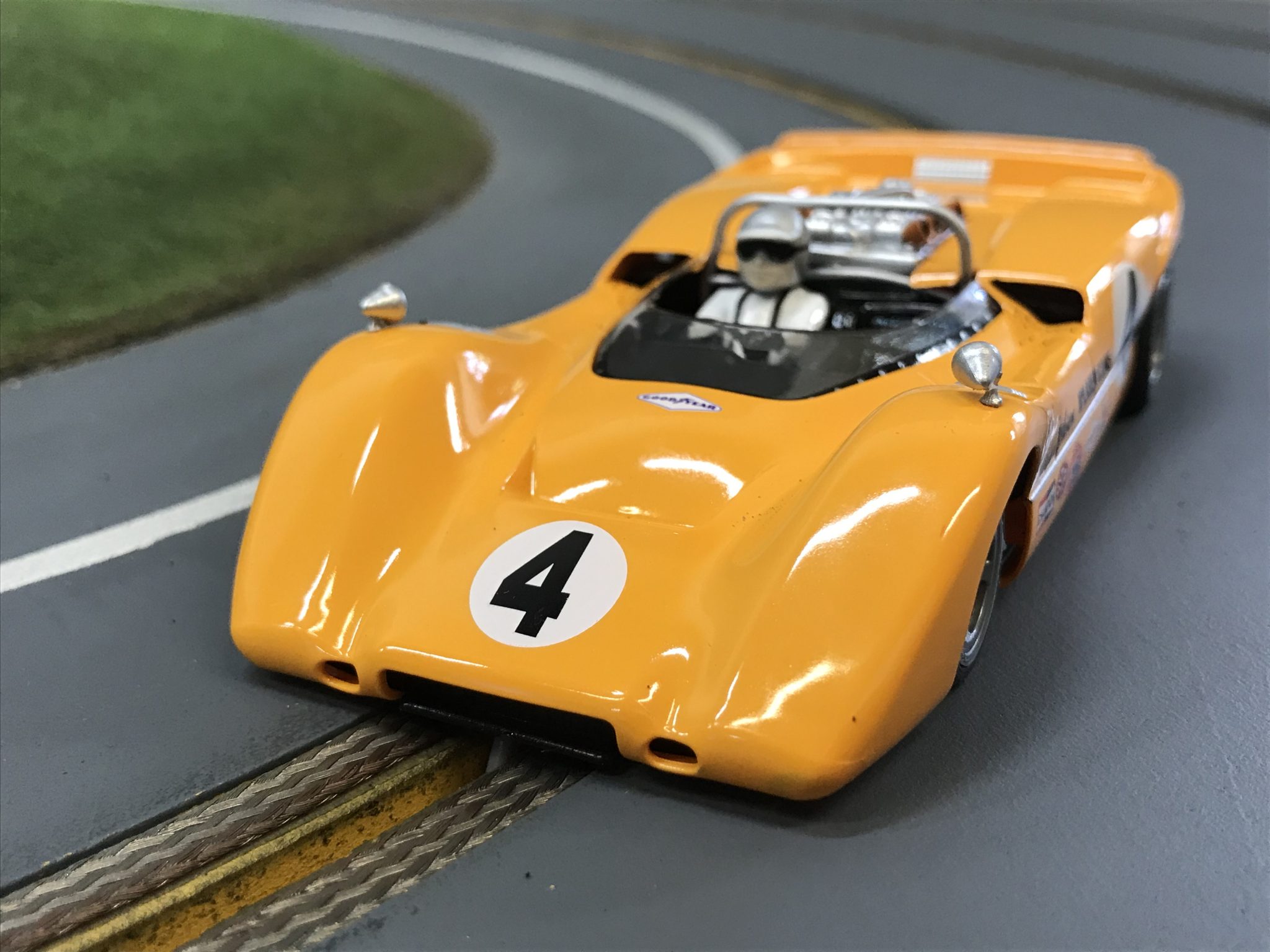 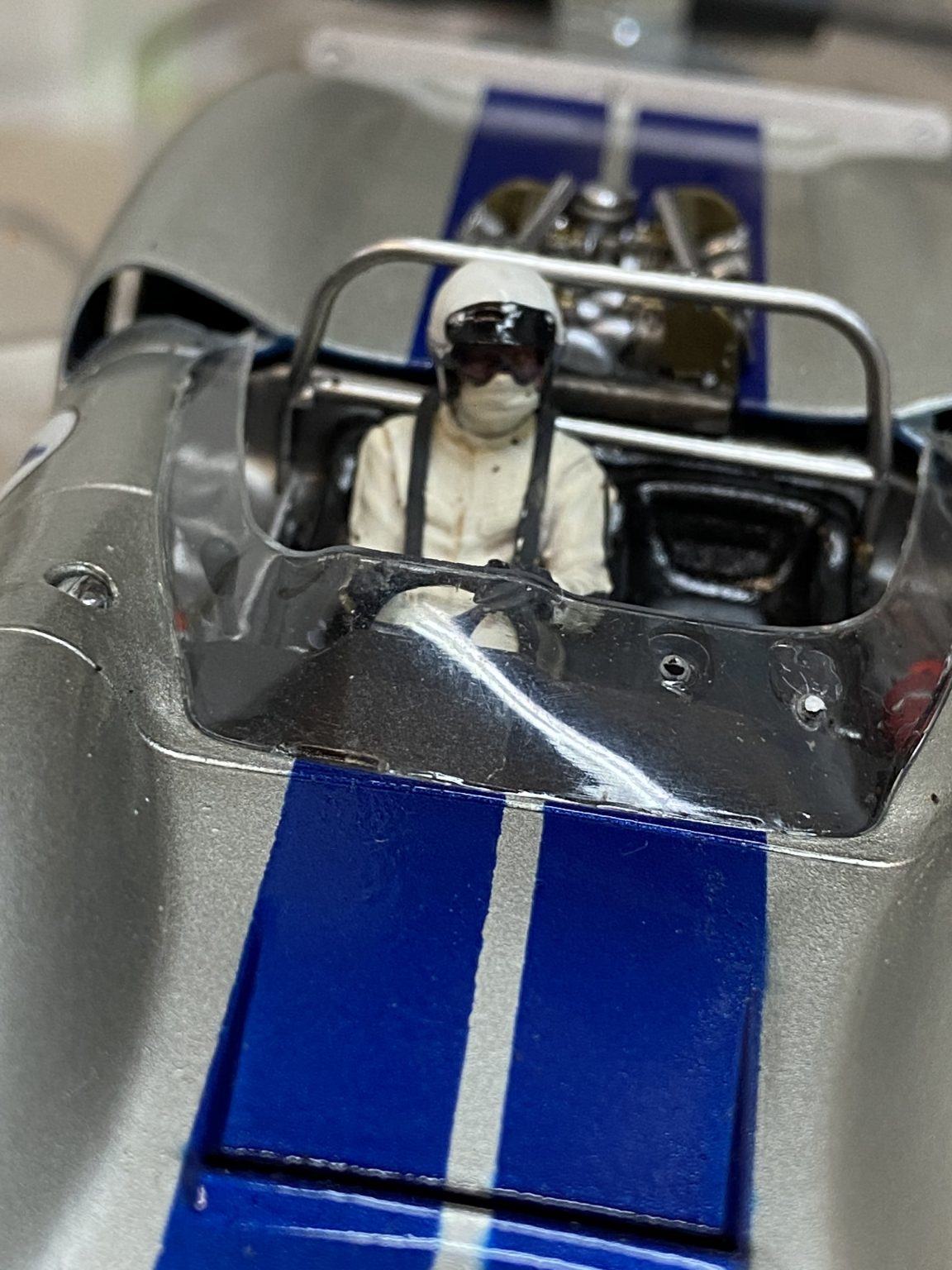 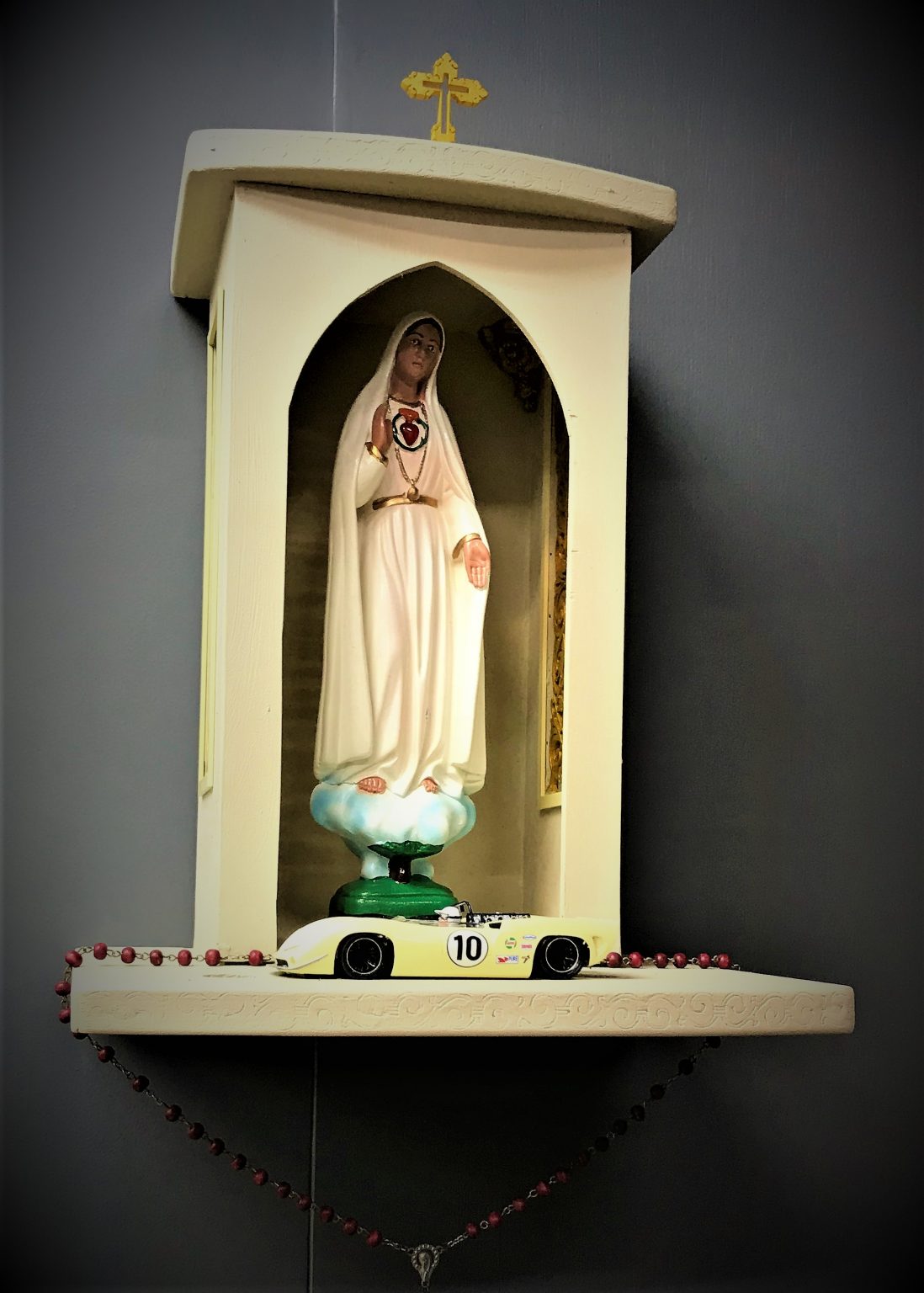 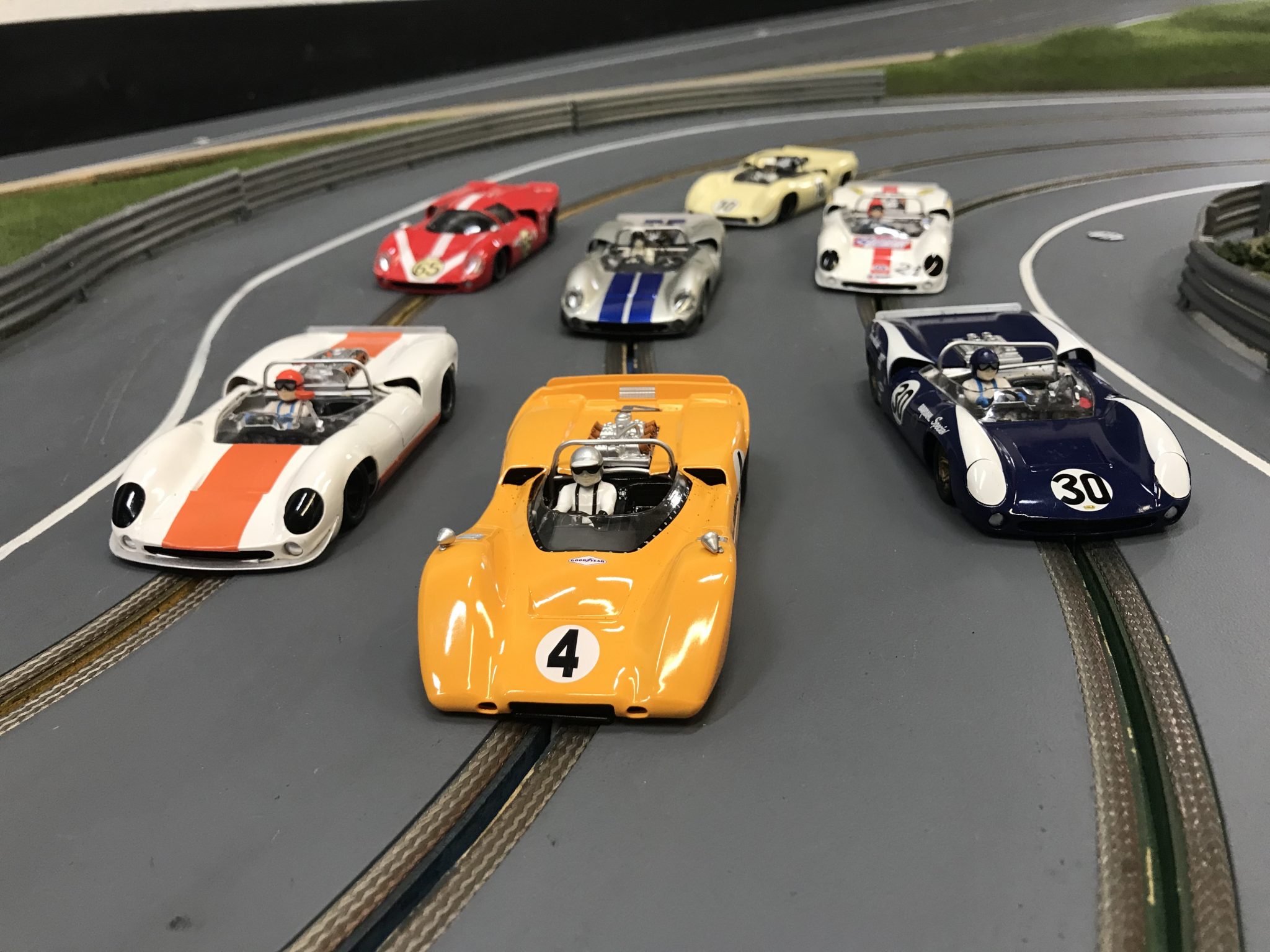