This past week’s Slot It Challenge race was another close one with the top five in the field being separated by eight laps.  Everyone is getting closer and closer as they get better and better at tuning the cars and learning the track.  Anyone that was skeptical about going to eleven volts should be skeptical no more.

The heat was also a non-factor as the temperatures were in the mid 80’s for the first time in a very long time.  It made the track room much more comfortable and the racing more enjoyable.

Here is the driver and car line up for this round of the Challenge.

Ary is running the popular Porsche in the New Man livery.  He has even installed lights so all the other competitors can see him coming up from behind.  The only thing that could make it more realistic would be the ability to flash them as he is closing in on the slower cars.  From the outside it looked like there was little to no development work done since the last race meeting.  His car and driving have been so good that Ary is in a class by himself for this round of the series.

Marty continues to run the Jaguar XJR9 that he has run from the start of the year.  He has told us that all development work has stopped on the Jaguar while work continues on the Q4 replacement.  The Jaguar has not been the fastest but has proven to be a reliable and stable since the move to the newer F30 Dunlap tires on the back of the cat.

Roy is running the Lancia to great effect.  He has made some changes to the wheels and the result is a super fast and stable car.  He has been working with experienced Lancia tuner ABR(Ary Barbosa Racing) to get every last bit of performance out of the Lancia.

Brian is running the Mazda 787b and continues to work on the car to make it competitive.  So far the new car had proven challenging.  Brian has decided to move to a different car for the Q4 round as a result of the poor performance of the Mazda.  Having said that, he is still doing development work on the Mazda in hopes it will finally come good.

Jim is running the popular Porsche 956 high tail that has proven so successful in past Challenge races.  The change from Jaguar to Porsche has been good for Jim as he is climbing the leader board and setting some very fast and consistent times.

Shawn is running his tried and true Porsche 962 in custom Coke livery.  No one can argue with Shawn’s car control and ability to get a car around the track as fast as anyone but since the motor swap he has been unable to get his car to cooperate.  This is further complicated by lack of time in his development schedule as he is looking for different funding options for his racing team.

Russell was away in Baltimore attending the AMLS and Indy Car races.  He was missed by everyone as Russell is always a great competitor and is always fun to run against.

The first heat of the day had Brian and his Mazda against Marty with his Jaguar XJR9 and Roy with his Lancia.  The interesting part of this race was the continued form Roy has found with his Lancia.  This has been his best round of the Challenge for Roy and it looked like his pace is still good.   Brian had a solid run with 69 laps and Marty took the early lead with 72 laps.

The second heat was highlighted by a low light.  Shawn was unable to get his normally reliable Porsche to stay on the track.  The car was constantly swapping ends and was almost impossible to drive.  Within the heat Shawn tried different tires, tried cleaning the tires and even played with the body and pod screws but it had little effect on the car.  The other cars were able to avoid contact with Shawn’s car and tally up a good lap count.  This was actually Marty’s best race with a total of 73 laps in the green lane while Jim had a solid 71 lap performance in the blue lane.

The third heat had Shawn back at it.  With no time between heats to properly work on his car Shawn was left with only the knowledge that his car was difficult to drive but was unable to work on it.  Marty moved to blue lane and was able to tally 72 laps while Jim was in yellow and tallied 69 laps. Shawn was in the green lane and was able to tally 64 laps from a car that was still not cooperating.

The fourth heat was the perfect heat for two of the three competitors as all of them had their best race of the day.  Ary was once again on form with a total of 74 laps in the yellow lane.  This was to be the most laps in a single heat at this race meeting.  Jim had a good run in the green lane with a total of 71 laps while Shawn was still fighting his car and managed a very commendable 67 laps in the blue lane.

The fifth heat saw great racing between Brian, Jim and Ary.  Jim and Ary both recorded 70 laps while Brian was very close behind with 69.

The sixth and last heat of the day saw two of the competitors tally their most laps of the meeting. Roy hit 71 laps in the yellow lane while Brian turned 71 in the green lane.  All of that took place while Ary and his Porsche totaled 72 laps.  Once again there was very close racing.

The overall standings with only one round of the Challenge to go are as follows:

The final round of the Challenge should be huge with second through fifth all being up in the air.  Add in the fact that some of the top placed racers will have to drop one race and you end up with numerous point scenarios that could play out at Saturday’s final race.  The points are such that we could see fifth place move to second and vice versa.  That is how big this race will be to the final results.  The tension will be high and the drivers nerves will be tense as it all comes down to one race.  Good luck to everyone and pour me a gin and tonic. 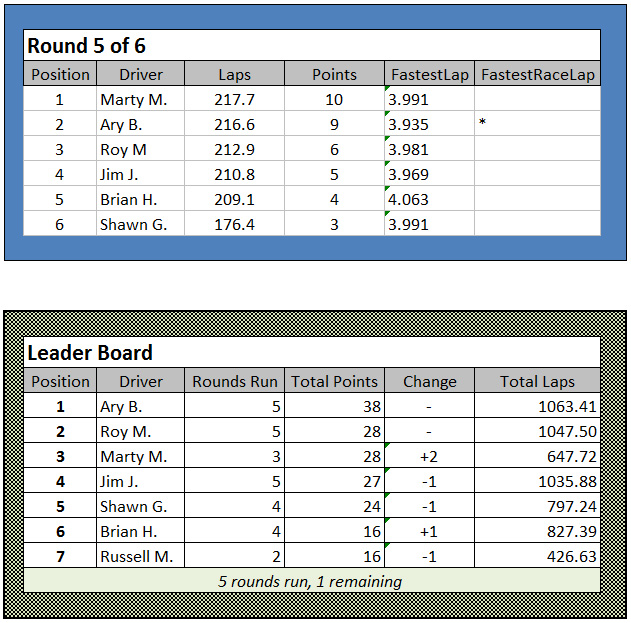