Race 2 of the 6 round Texas Slot It DTM Proxy Shootout was another amazing round of the series with some of the closest racing we have seen.

The cars have been locked down since the last round of the series as per the series proxy rules and similar to the way any other proxy would run. 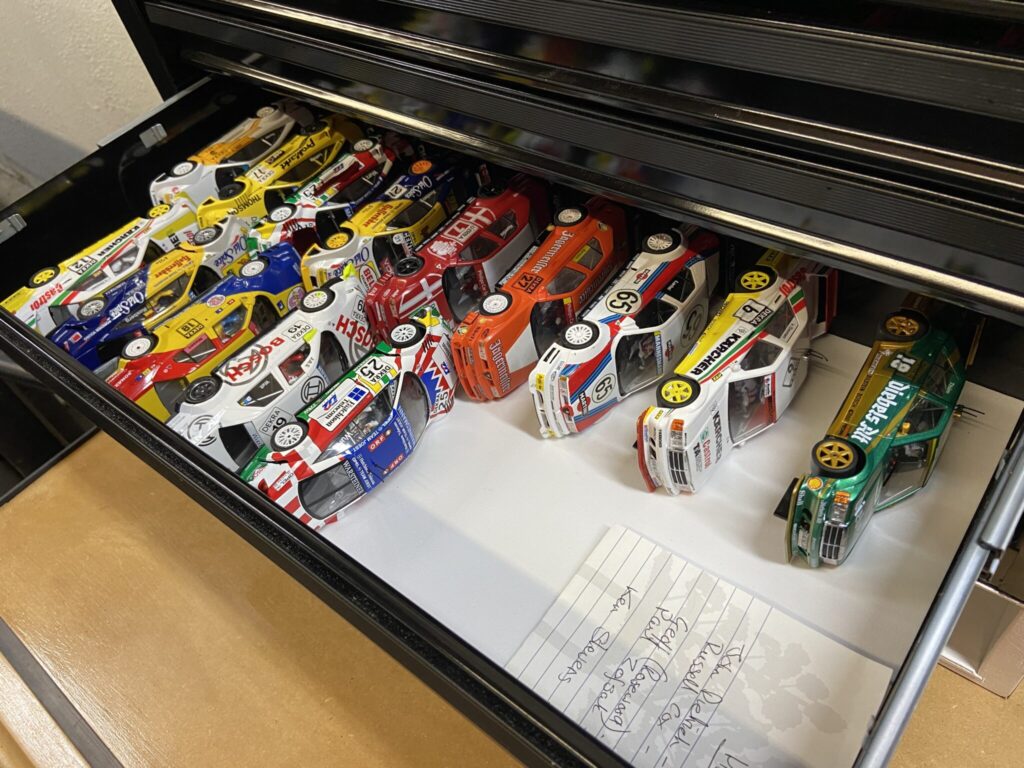 In other proxy races the cars would have been shipped off to and run on another track but in the Texas Slot It DTM Proxy Shootout the six rounds of the proxy are being run at just two tracks – 3 at the Austin track and 3 at the Houston track. 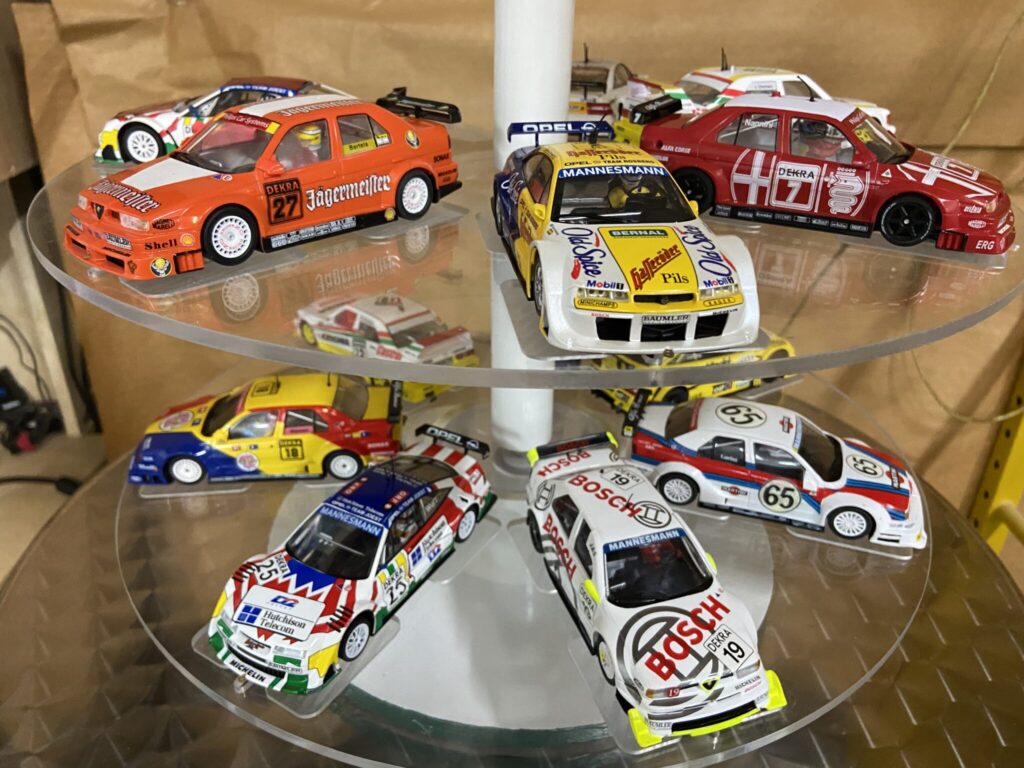 You might think the cars that did well in the first race will do the same in the second race as the cars and track are both the same but that is not always the case.  Many things affect the way cars perform on the Austin track – humidity, ambient temperature, track temperature and general track condition like dust and rubber.  Not to say the club does not spend loads of time cleaning the track but you can never remove all the contaminants. 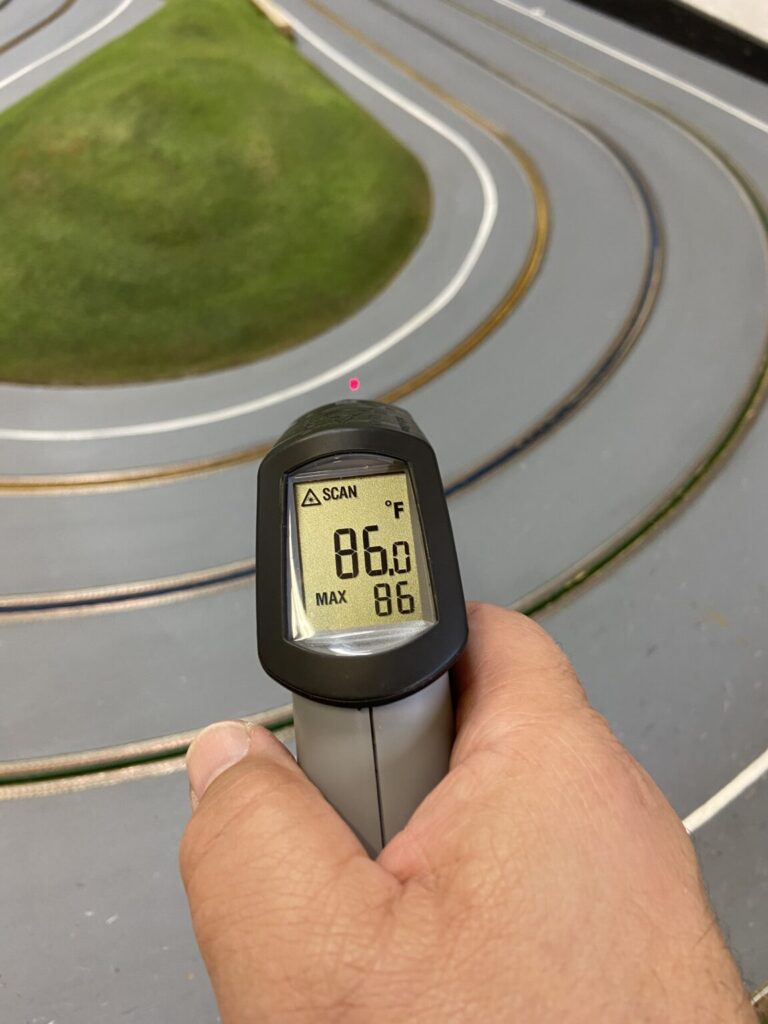 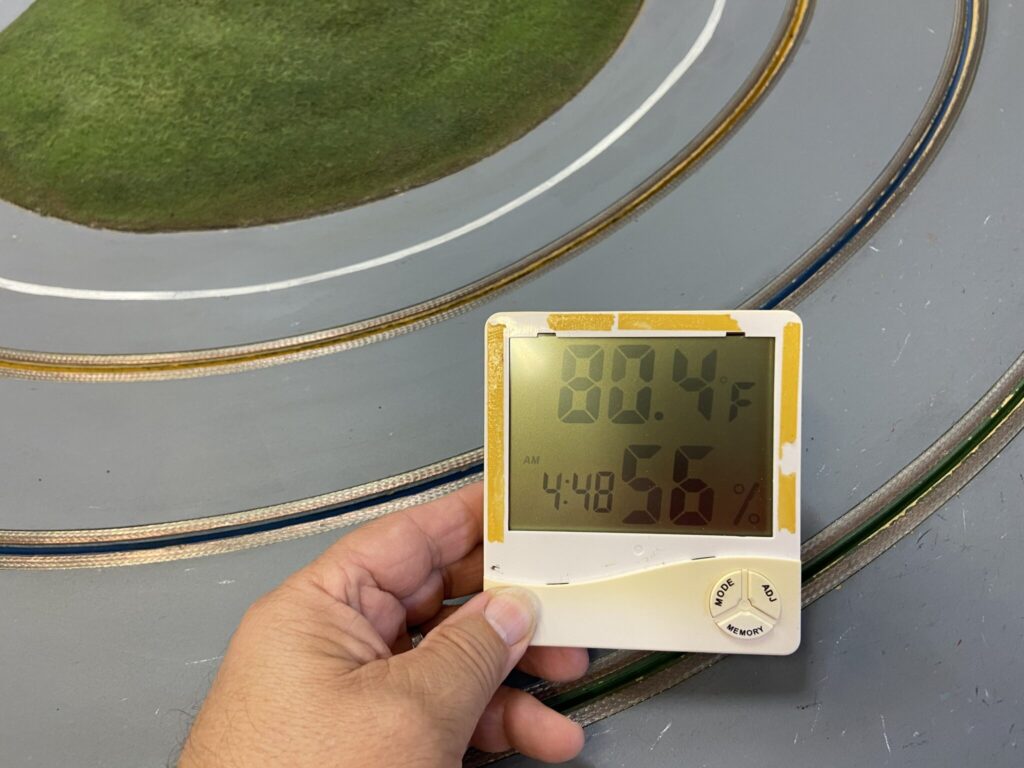 The only car work done on any of the cars involved two cars from the Houston club.  Both cars were at the bottom of the results for the first round and during a post race inspection it was discovered that the front of both cars were too low and the front part of the chassis’ were rubbing on the track surface.  This was not only holding the cars back from hitting their top speed on the straights but pushing the rear of the car out in the turns due to the added resistance at the front of the car.  Both cars were running the smaller Slot It zero grip front tires.  Grub screws were added to the Opel to get the front axle/wheels adjusted correctly to lift the front of the chassis up while the Mercedes had the front tires changed from 17” to 19” zero grips. 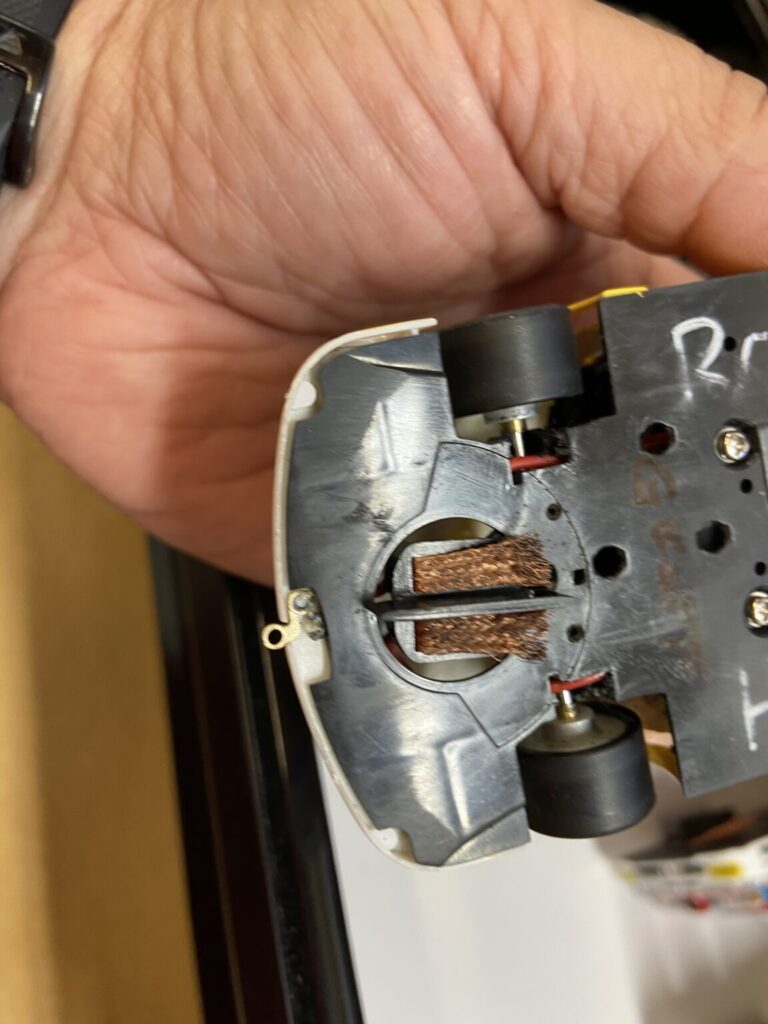 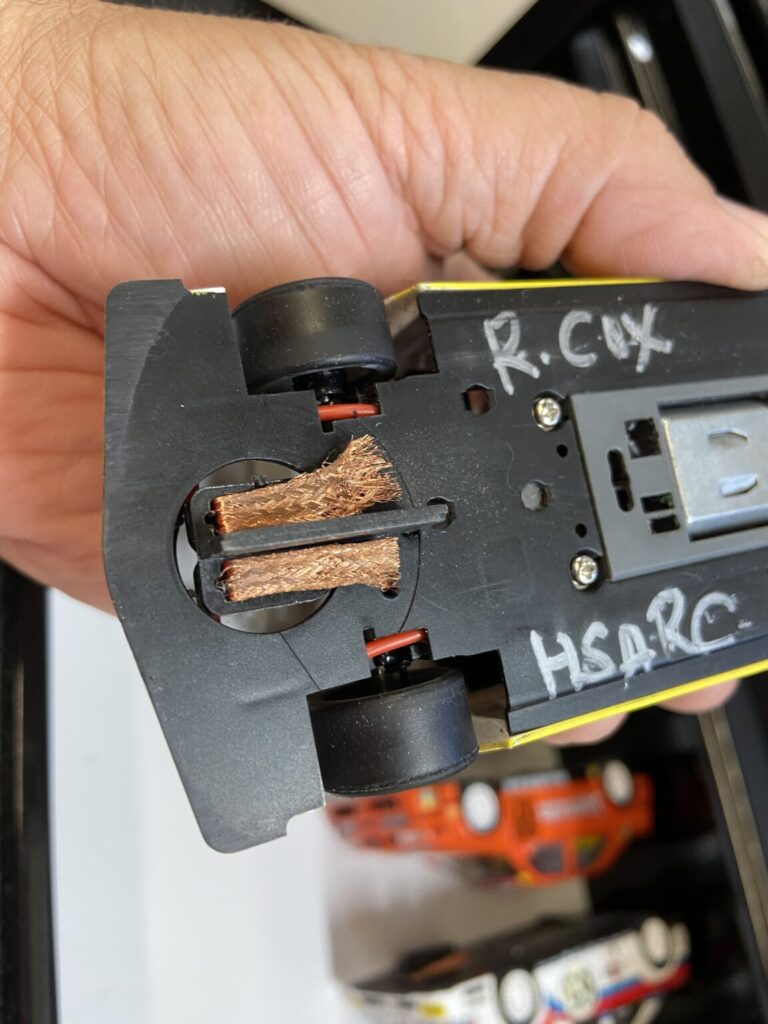 All cars were inspected and test run to make sure everything worked well and they were ready for the pounding three rounds of fast paced racing can put on the cars.  Tires were cleaned on all cars every time they hit the track to make sure they started every heat as clean as possible.  Tire cleaning was done using the clubs custom packing tape tire cleaning tool and lighter fluid. 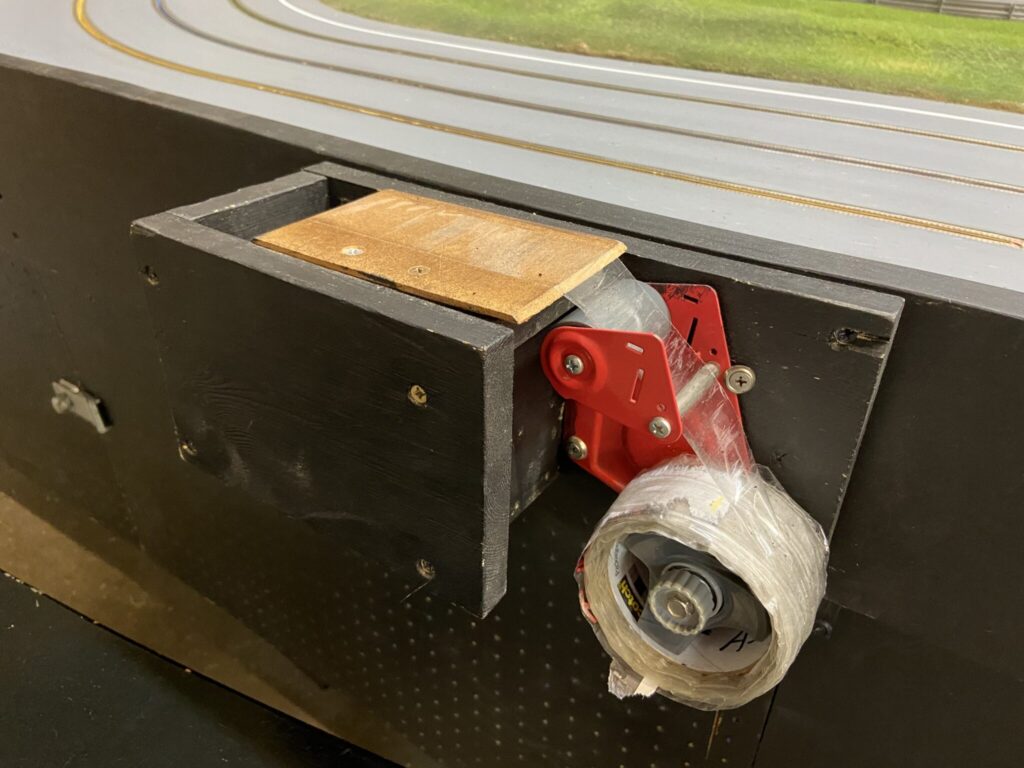 Once all the cars were inspected and cleaned it was time for the race.

The first heat was a sign of what was to come as the cars were quicker than the first race.  This could be due to the track temperature being slightly higher, giving the cars better traction or it could be due to the drivers feeling more comfortable with the cars and the format, either way the cars were quicker.  Having said that, the fastest times were set in the middle of the 14 heats as the drivers got in the grove and the track was coming in. 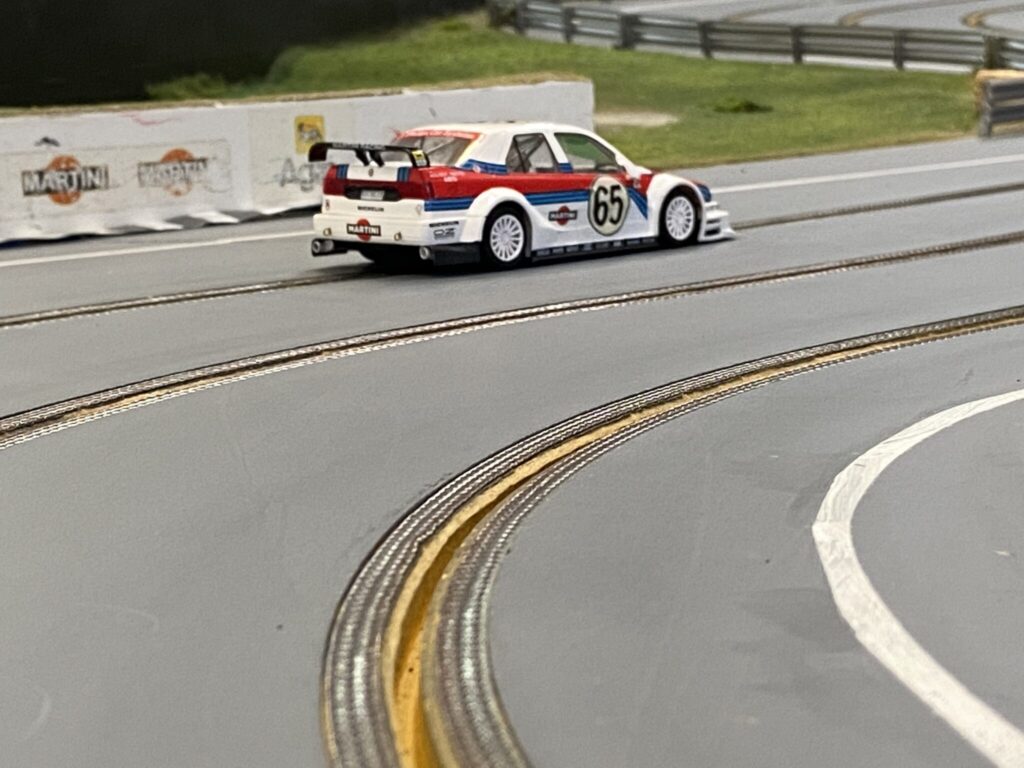 The other thing that was hard not to notice as the heats progressed is how close the racing was.  Many of the heats had racers separated by less than one lap.  This kept things interesting as the racing continued through all 14 heats.

The racing continued to be close through all the heats with the sole exception being the fastest car – David’s Opel…..again.  David’s Opel led the field again with almost a 4 lap lead over the second place car.  This was one of the biggest gaps between two positions for the entire race.  Be sure to check out the upcoming “Under the Hood” story to see exactly what David has done under the hood to build such a quick and competitive car.

The next thing of note was the results for the 2nd to 4th place cars.  These three cars were separated by less than a quarter of a lap.    Let’s take a look what that looks like in real distance.

One of the interesting things about the 2nd and 3rd place cars is that both used Slot It’s N22 tires and not the more traditional F30’s.  These two Alfa’s are the only two using these tires in the series. 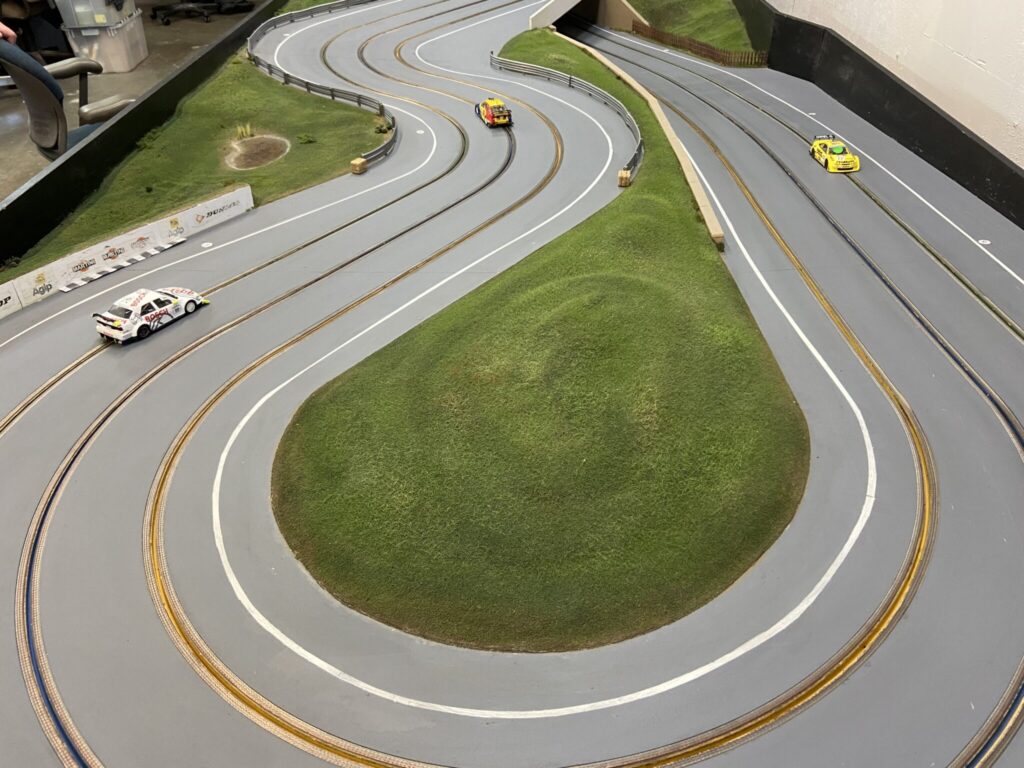 The rest of the field was not far behind with the top 12 all running 200 plus laps with only a 10-lap gap from 5th to 12th place.  Many of these cars had a better outing than the first round but all the other cars had better outings as well so their overall placing was in-line with their first race.

The only car that had an issue was unfortunately Russell Cox’s Mercedes.  His car finished in 12th place and performed much better than it did in the first race but the performance of the car was not what it should have been in the final heat in the green lane.  The car looked slower and was having issues accelerating.  It was only after the heat that we discovered aluminum crown gear was sheading leaving aluminum dust all over the rear tires and drivetrain.  The cause of the issue has not yet been determined but the car will be repaired and made ready for the third round of the series as per the proxy rules. 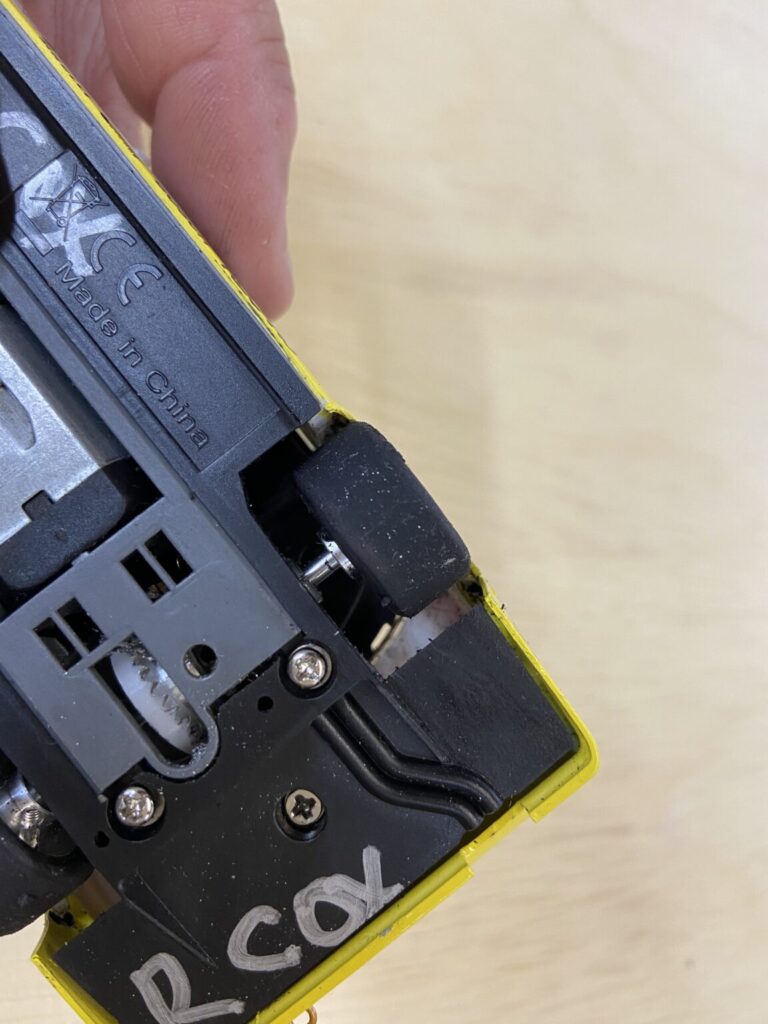 The only issue we had with in this round of the series occurred during heats 4 and 5 in the yellow lane.  David, driving the yellow lane started having issues with his DiFalco controller.  He began to realize the brakes felt different and were inconsistent.  This meant he had to really stay on top of the braking zones and maybe drive a car slightly slower to keep the cars under control and in the slot.  The braking pot was cleaned between the 4th and 5th heats but that did not totally fix the issue so the race was paused while the brake pot was removed completely cleaned, reinstalled and checked.

Just like real racing, it can be the smallest thing that makes the biggest impact on the results.  The take-a-way here?  Be sure you maintain your controller as it’s key to your racing success. 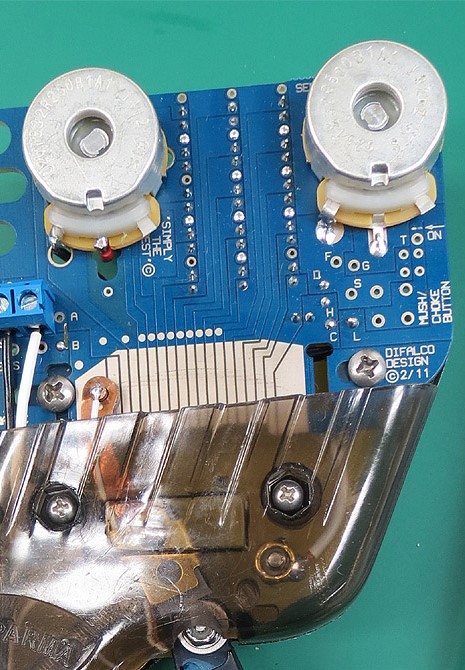 The overall results are posted and show some changes in the overall positions.  Bear in mind that racers will be allowed to drop one race for the final results so the one Mercedes that failed to make the first round is effectively still in the running.  The same could be said for any car that has a poor outing.  All of this makes it difficult to see how the final results will look but the one thing you can see is how close everyone, other than the top placed Opel are running.  A spread of a couple of points makes the difference between 2nd and 7th and only a few more points to cover 8th to 11th.  No one is out of the running for a podium at this point. 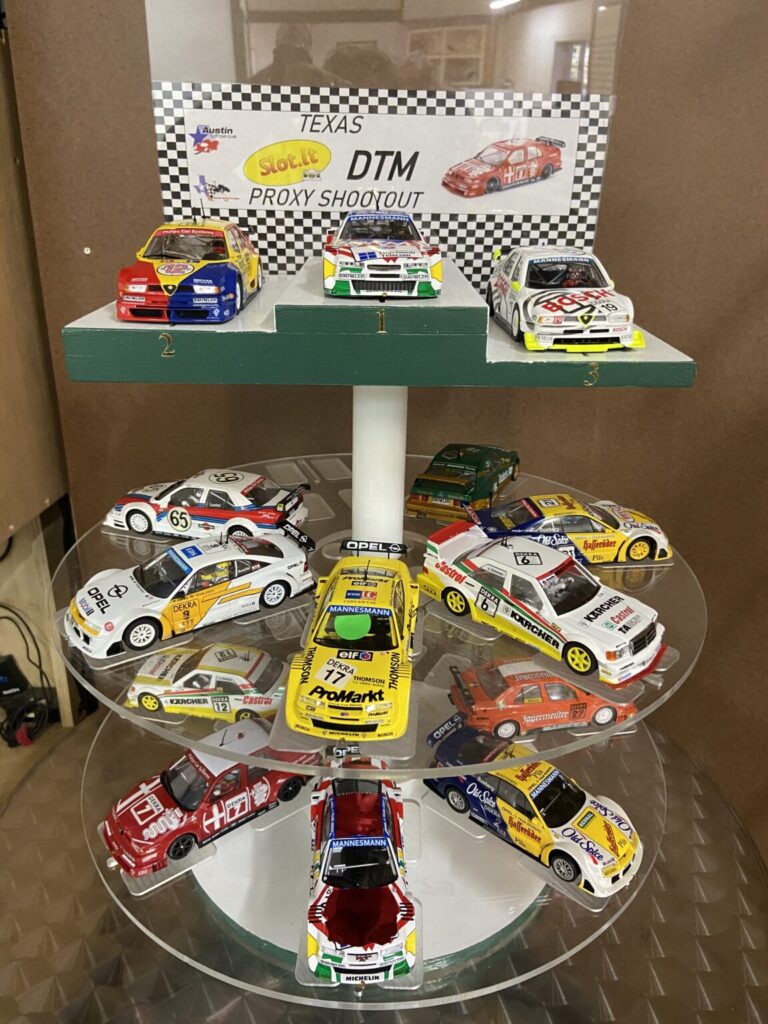 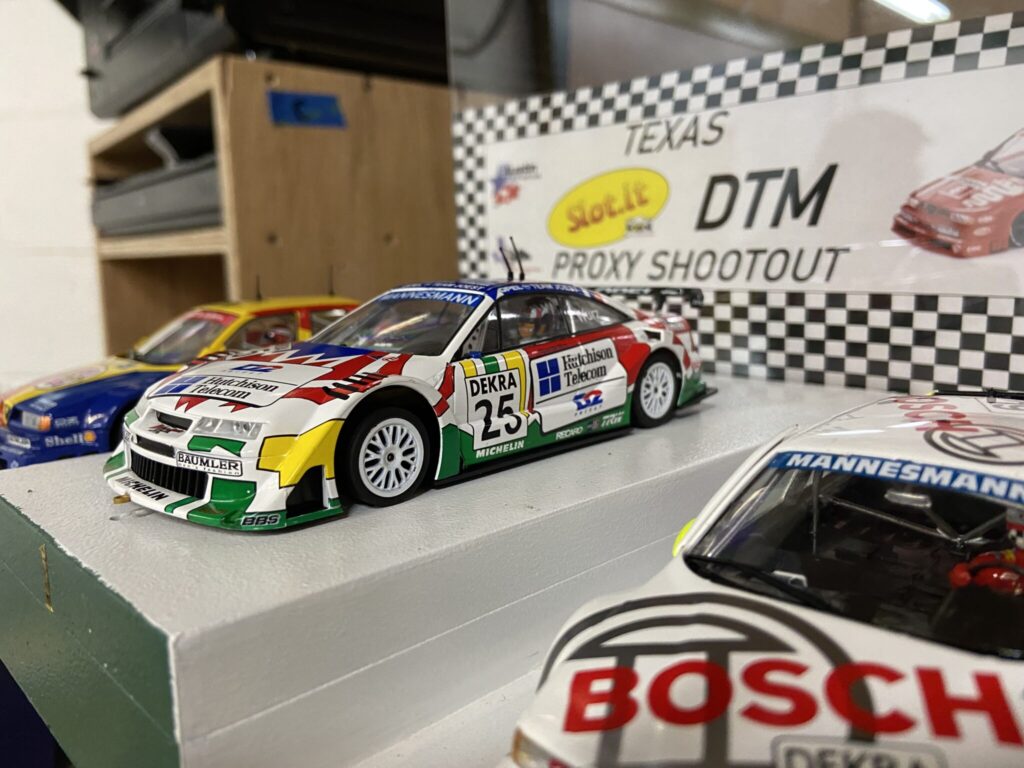 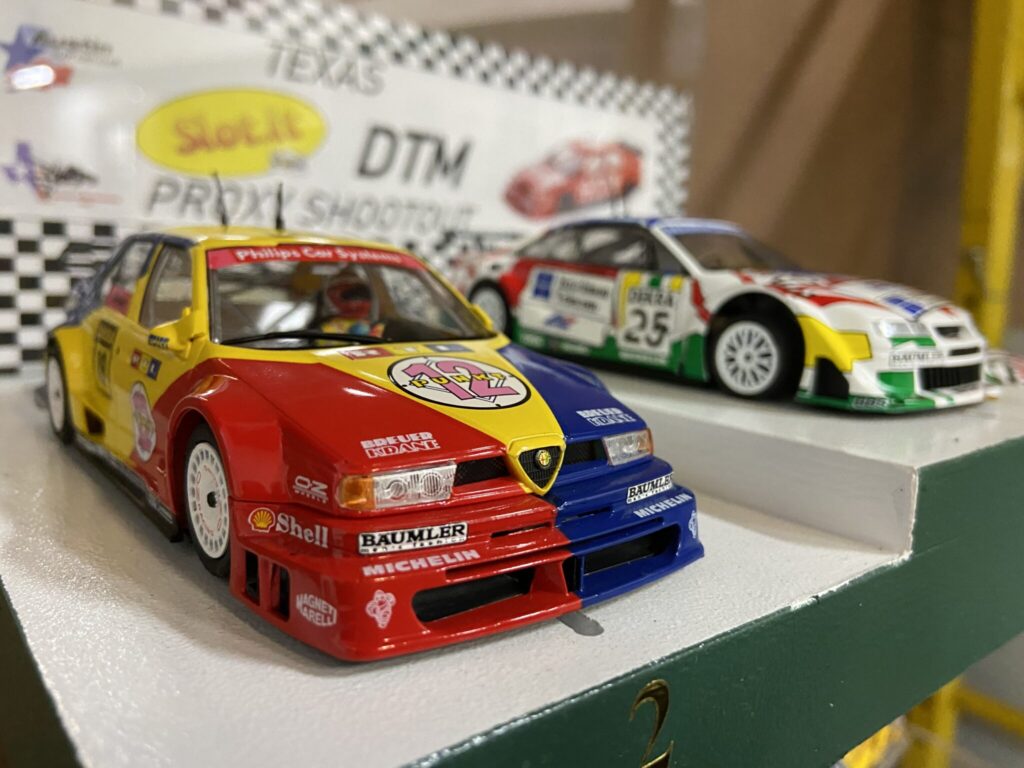 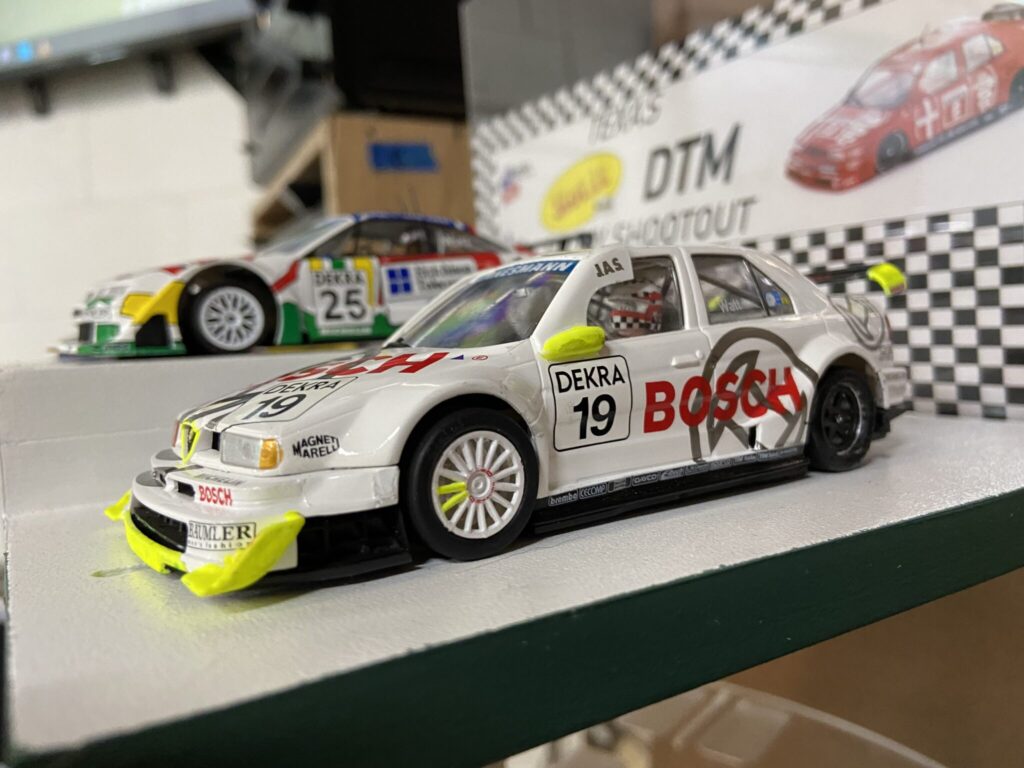 The third round of the proxy will be critical to the Austin Slot Car Club members as they will be trying to use the home track advantage to put as much room between themselves and the cars from Houston before the final three rounds at the Scale Auto Racing Club in Houston where their cars will most certainly have the competitive advantage.  I can’t wait to see how the next round goes.  Please tune into the clubs YouTube channel at 1pm, November 21st to watch how it all plays out. 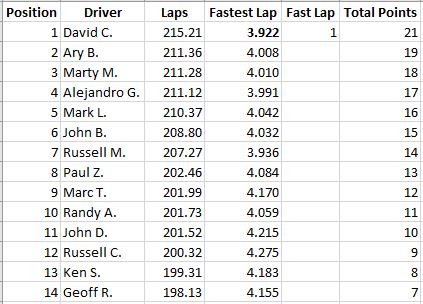 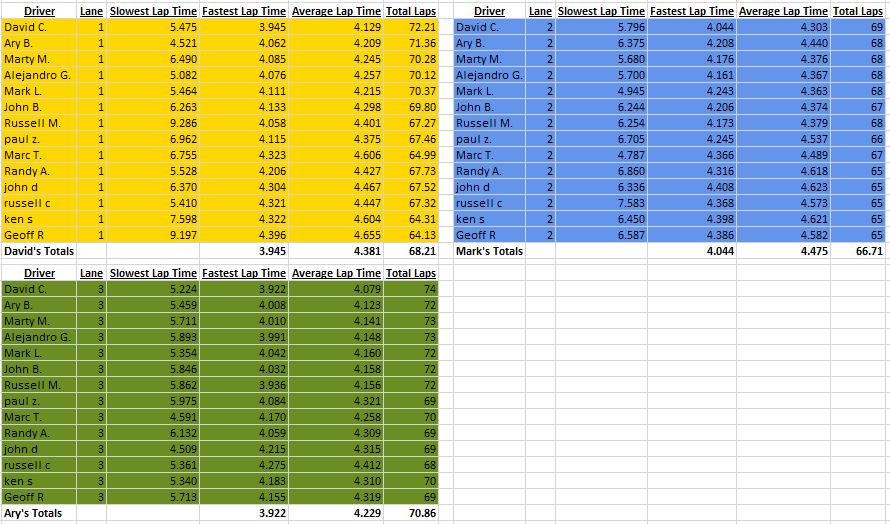